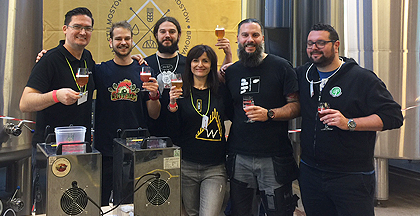 The Haandbryggeriet brewery from Drammen, Norway hosts an interesting events that has brought together breweries from all parts of the world. There are representatives of the Scandinavian, British, Scottish (BrewDog), Belgian, Dutch, North American and New Zealand craft. Browar Stu Mostów is the only brewery from Poland. We promote ART#12 Mango, Strawberry and Raspberry Ale – collaborative beer brewed in WRLW with Haandbryggeriet. The beer has been given great reviews in Poland, and we hope for it to be appreciated in Norway as well.

ART#12 is well reviewed. SALAMANDER Blackcurrant Milkshake IPA, our classic AIPA and Pale Ale are also appreciated, as it the classic version of WRCLW Schöps. Let us take this opportunity to remind you that WRCLW Schöps Smoked Plums Rum B.A. 2017 is going to make its debut soon: on November 2. There is also WRCLW Pils, which does not come as a surprise. In Norway, Pils is also considered as a showcase of the brewery’s capabilities.

Invitations at www.facebook.com/events/468234446880261
First reviews of ART#12 at www.ratebeer.com/beer/art12-browar-stu-mostowhaandbryggeriet-mango-strawberry-raspberry- ale/559073/