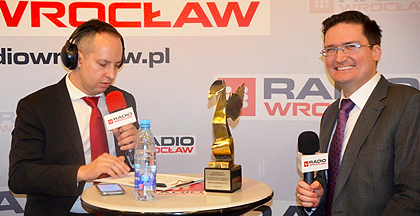 The Lower Silesia Gryphon is one of the most important and prestigious awards in the business and economic fields in the region of Lower Silesia. There were 24 companies out of 160 nominated for the award in this year’s 14 th edition. The awarding ceremony took place yesterday at the Business Gala at the National Forum of Music in WRCLW.

We have been awarded the Gryphon in a highly competitive and prestigious category of innovative ideas for business/development of micro and small companies. For the synergy between beer and cuisine, which has led to the establishment of a new business, Concept Stu Mostów. The synergy is based not only on knowledgeable and experienced staff but also on scientific research conducted in cooperation with the University of Life Sciences in Wrocław. We have been involved in many research projects, some of which have been well appreciated for exploring the benefits of using brewers grains in baking. We felt as proud as two years ago when we were awarded the Wrocław People of the Year Award or the prestigious distinction of being among the “Top 30 Creative in Wrocław.” Although the nomination is for the brewery itself, we consider it as an award for the entire sector. For us the BREWERY means the passionate people, who want to brew interesting beers that bring people together and create our identity. The brewery has built bridges between traditions and the future, shows brewing in the wider context of the debate on the value of FLAVOURS and the quality of our produce. It is our mission to show the DIFFERENCES between the craft and commercial food production. We view the BREWING industry as a creative sector. As a CREATIVE SECTOR, we attract talents and build a creative atmosphere. We cooperate within our sector. The number of craft beer initiatives has been on the rise. We are awarded individual awards but we owe it to the entire sector. The foundation for development today is exchanging experiences. We are so proud of our team members who all come from different backgrounds. Every day brings us new ideas and sheer joy of being part of big changes. We are aware of the role WRCLW and Lower Silesia play. It makes us incredibly happy to be the leader in Poland in terms of the number of collaborations with breweries from other countries. World-class brewers come to WRCLW to work on collaborative projects. As we stated yesterday, we keep investing in equipment so that Browar Stu Mostów could join the European elite. Our investments have led to numerous awards for our beers, dynamically growing sales and export to 10 countries. During last night’s gala the fact that we have been cooperating with scientists was appreciated. So far we have been promoting the cooperation with the University of Life Sciences in terms of internships and opening the first in Poland postgraduate studies in “Technology of brewing.” They are offered by the Institute of Cereal Fermentation Technology, Department of Biotechnology and Nutrition, University of Life Sciences in Wrocław. There are many more projects, whose aims include finding the added value that will strengthen our position on the Beer Map of Poland and Europe.

The mission of the Lower Silesia Gryphon award is to promote and award the most important economic achievements in the region. The award appreciates innovativeness and investments, supports local activists and all the benefits that 300 thousand companies give to our region. The Lower Silesia Gryphon appreciates those who make the economic and social future of the Lower Silesia. We couldn’t be happier to present dynamically developing craft brewing industry in WRCLW. It is our contribution to the growth and image of the new wave brewing industry in the city where beer has been an important part of an everyday life of its inhabitants. Wrocław is often called the City of Good Beer and we believe that craft brewing makes an excellent trademark of the city.

The 14th edition of the competition has brought to light recent market trends. Innovative solutions for businesses are gaining in importance. Innovations are the competitive edge and added value on the market. Companies from the Lower Silesia region stand out on the local and international scenes. It is worth mentioning that the Special Gryphon and the title of the Personality of the Year in the Lower Silesia region went to Radosław Ratajszczak, the director of the Wrocław ZOO. The event attracted the most important personas from Wrocław and Lower Silesia.