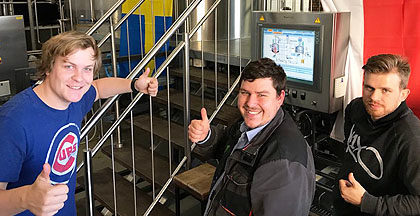 Collaborative Brewing with Brewski! Join us for Meet the Brewer at 7:00 p.m.

Join us to celebrate a Scandinavian day at our pub on Długosza Street. We are serving prawn sandwiches and meatballs which sold like hot cakes at the Brewski takeover. Our doors are open all day today. We started the collaborative brewing yesterday.

Tonight we are going to share our experiences and stories about our collaborative project. The brewers are going to answer your questions. As we have already announced, our collaborative brew is going to be quite bitter with clear citrus tones. Similarly to us, Brewski enjoys brewing with natural and fresh fruit. We have brewed with fruit before but as for tropical fruit Brewski is going to take the lead. We are going to use the centrifuge that the brewery from Helsingborg is not equipped with. It is all going according to the plan. We are ready to announce the brew’s debut date: 23 November. Stay tuned.

Yesterday we had a great opportunity to go sightseeing around WRCLW and taste traditional cuisine from our region at Wrocławska Gastopub: Wrocław stew; noodles; pierogi; potato pancakes with stew; ribs in beer sauce. For starters: raw meat tartare and a lot of WRCLW Schöps. As for beer tastings, we started from Spiż, dropped to Złoty Pies, did a pub crawl around the main square and ended up in Kontynuacja, where we had a wide range of Polish beers available. Another stop at Szynkaria and AleBrowar on Włodkowica, and a return to DoJutra to have some fun, debunk myths and take some memories away. This is the less often described side of collaborations. We exchanged experiences regarding brewing traditions, beers, yeasts and hops meeting loads of friends and visitors. The beauty and hospitality of WRCLW has made a huge impression on our guests. Thanks everyone! Take your first sip of craft beer in WRCLW.