Oktoberfest Alternative
– local beers; atmosphere and menu go back to 1924 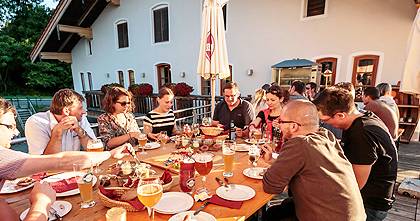 Local beers; atmosphere and menu go back to 1924

Oktoberfest Alternative is a historical event drawing from the traditions of the Munich-style Oktoberfest organized in Wrocław since the turn of the 19th and beginning of the 20the century. The best craft beers from Wrocław and Lower Silesia are going to be available on taps. The music from the 1920s is going to be played in the background. There will also be delicious food and great atmosphere. The menu recreated from the 1924 Oktoberfest will be a major attraction. The dishes will be served on Friday and Saturday, 6 and 7 October, at Augustiner Bräu at the corner of Plac Solny and Ofiar Oświęcimskich. Michał Czekajło is the main chef of the project; Concept Stu Mostów has provided support, and Grzegorz Sobel, PhD, has offered his invaluable help. We are going to serve Schweinernes, Weißwürste, Haxen, Hend’l vom Rost, Nürnberger Bratwürstel, Leberknödel and Kalbskopfe, or boiled (or roasted) bacon, white sausages; pork knuckle, barbecue chicken, Nuremberg-style barbecue sausages, liver dumplings, and veal heads.

The event promotes local beers and traditions of Oktoberfest organized in Wrocław. The attractions include an exhibition on Oktoberfest as it used to be held in the city: multimedia presentation of the exhibition “Beer in Wrocław”, reproduction of postcards, and news ads. There is also a layout of the menu from 4 October 1924. There is a note on the original menu that this is only one section of the whole, and a note “I a Gerichten”, or “Erstklassige Gerichten”, which stands for first-class dishes. There will also be a competition for the most interesting Bavarian outfit. Visit Oktoberfest Alternative at the City’s Arsenal in Wrocław between 6 and 8 October. Friday from 4:00 p.m. to 10:00 p.m., Saturday from 12:00 p.m. t 10:00 p.m., Sunday from 12:00 p.m. to 6:00 p.m. More about the event at www.facebook.com/events/1915178038743308

Here is the original 1924 menu from Augustiner Baeu, typical dishes of the Munich-style cuisine served at Oktoberfest.

Schweinernes – a delicacy from the Austrian and Tyrol cuisine that has found its way to the Bavarian menu. Now considered to be an integral part of the beer culture in Munich. The original Schweinernes includes pork pieces: bacon, parts of pork knuckles, throat etc. roasted on a spit. There are many varieties of Schweinernes. As it used to be a villagers’ dish, there are as many types of Schweinernes as there are villages. There are Schweinernes in sauerkraut, or marinated pork pieces fried with onions and greaves. It is all about pork prepared in a simple way. In the Tyrol region, Schweinernes include cold pork meats, previously roasted, smoked, or boiled etc., served in slices with horseradish sauce or horseradish, onions, pickled cucumbers or other pickles.

Weißwürste – the famous white sausage that holds the same place in the Bavarian cuisine as in the Polish one. It used to be served boiled with mustard and horseradish on the side.

Haxen – pork knuckle. In Bavarian cuisine boiled in good beer that Munich has been famous for.

Nürnberger Bratwürstel – premiere league in the traditional cuisine when it comes to grilling the sausage. It is a type of thin, white Frankfurter-style sausage. An original one cannot be found in Wrocław anymore, so we are going to serve a Frankfurter-style sausage, meatier that a typical hot-dog sausage. It’s all about grilling the sausage dark and crispy. It is served with boiled sauerkraut and a roll.

Kalbskopfe – veal heads. Heads used to be quite commonly served in Wrocław restaurants. It used to be an expensive dish. A customer would be served half of the veal head cooked with spices, served with mustard and horseradish on the side.