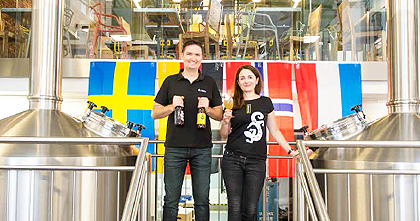 Top 30 Creative is an exceptional event in Poland bringing together entrepreneurs from a wide variety of fields such as business, science, art and culture. This year brewers have joined the participants for the first time. At last, craft brewing has been appreciated as a creative sector! With its creative tension and creative twists that define the Polish character, craft brewing seems to fit perfectly as the trademark of Poland. Beginning with today, it is going to be commonly known. That’s what the craft brewing is famous for.

Top 30 includes people who have achieved success through their beliefs, hard work and passion. The event aims at presenting their objectives and everyday work. We have been asked about the key to success and the role Wrocław plays in our lives. Looking at the answers, it couldn’t have been more apparent that for all the nominees it is Wrocław where dreams come true. This is where creative people are born or where they choose to live. We know many of the nominees in person. They have been our guests. They make us believe in our mission and encourage our self- development. Their passion and dreams make Wrocław an open and friendly place to live. It’s the right address to live, study and work.

Here is the text of our nomination: “Well-educated managers with professional background in corporate and investment banking who value freedom most. They have travelled the world but settled in Wrocław. Establishing Browar Stu Mostów, which has defined the craft brewing as a creative sector for the last three years, they have been stimulated by the desire to create a tangible and enjoyable product to be proud of. Our decision to leave the banking sector was a brave one. We were very passionate and we had a good plan. We have decided to invest in state-of- the-art equipment by the German company BrauKon used by the most prestigious craft breweries worldwide. We have gathered a wonderful team of experts and individuals who work well in a team. We keep investing in our project and educating about it. The Brewery is open for visitors who are encouraged to learn about the production process – share the founders of Browar Stu Mostów.

Having made a name for itself as the “Craft Ferrari,” Browar Stu Mostów has been actively regaining the position of Wrocław on the map of the brewing industry. The brewery has been successfully drawing upon traditions and keeping up with the latest new wave trends in craft brewing.

It’s all started with the WRCLW brand, which contains consonants only, just like their brews that contain only traditional ingredients used in brewing for ages. Craft Pils, Roggen, Hefeweizen and RIS were later joined by WRCLW Schöps – the beer that has revived the oldest brewing traditions going back 800 years which has become the symbol of Wrocław and made the city famous – said Arletta and Grzegorz.

Their beers are based on traditional brewing methods and natural ingredients. The cooperation with the Wrocław University of Life Sciences has resulted in a complex training program and the first in Poland post-graduate studies in brewing.

Beers brewed under the three brands of the brewery – WRCLW, Salamander and ART – have been awarded golden medals at the most important contests both in Poland and abroad. ART#9 Oatmeal Hoptart has received the title of one of the best new beers in the world. The pub on Długosza Street has received culinary distinctions for foodpairing, and promoting the knowledge about how to best pair food and beer, including highly popular Pale Ale and AIPA. – The brewery serves as a meeting place for brewers and enthusiasts. We brew unconventional beers that facilitate the appreciation of a wide range of flavors. We value meeting over high quality beer and food. Beer in Wrocław has always brought people together. It was in Wrocław that a wonderful toast was born, Salamander, which stands for respect and friendship. Salamanders are traditionally associated with fire, as the saying goes “through fire is the spirit forged”– said Arletta and Grzegorz.

Taking a tour of the Brewery makes it possible to see and taste the difference between craft and mass production. Next to the brewery, there is Concept Stu Mostów, a creative space for bakers, chefs, a cheese-maker and pastry chef who use beer, wort, malts and brewer’s grain to produce pretzels, breads, pastry delicacies and mustards.

– At the core of Concept Stu Mostów lies cooperation and interdisciplinary exchange of knowledge. Our projects have been implemented so as to release creative potential and enable craft collaborations. Ours is a dream team. For us, success equals positive reviews from our customers, restaurateurs and brewers. We are proud to co-create the atmosphere of the city where craft brewing is considered to be one of the trademarks of Wrocław, Lower Silesia and Poland – said Arletta and Grzegorz.

Browar Stu Mostów has made a name for itself as the “trademark of Wrocław.” Beer brewed in Browar Stu Mostów has already found its fans in 10 countries. It was in Wrocław that the first collaborations between Germany, the USA (twice) and Spain have been established. The willingness to share experiences has built bridges with leading European breweries: Camba Bavaria, Jopen, Naparbier, and Brewski. We are putting our vision into practice. We are creating beer that brings together history, present and future; people, cities, and countries –Arletta and Grzegorz reflected on their mission. Brewing in Wrocław is magical. This city is open for new talents and ideas. It is a great place to live in –Arletta and Grzegorz sum it up with a smile.

The photograph has been taken with fags of our collaborative brewing partners in the background. Beer Bridges are slowly becoming the trademark of the Brewery, similarly to our brands. The way the flags are displayed brings to mind the commentary by Wallace Olins. We are not as social as the Swedish, not as hardworking as Germans, not as health as Norwegians. We did not have, just like the Dutch did, 300 years to build business relations. We have achieved a lot in 30 years. We did in nearly 3. We totally agree with the fact that “Poles should like themselves the way they are, and see strengths in what we have so far considered as weaknesses. Poles are emotional, chaotic and unpredictable. We are perceived as highly creative people who work it out at the end. We have our own style and inexhaustible energy that makes the Old Europe seem a bit fatigued.” Craft fits this description perfectly. 100 out of 100.