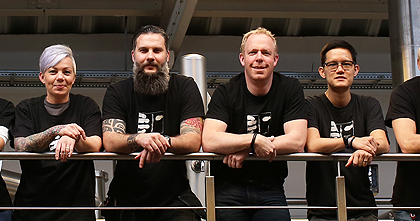 Join us for the Meet the Brewer event after the Friday collaborative brewing with the Norwegian brewery HaandBryggeriet.

Known as one of the best breweries in Scandinavia, HaandBryggeriet has been involved in many collaborations beginning with De Molen to the recent collaborative brew the Stone and BrewDog breweries. What they brew is a wide range of traditional and new-wave beers including barrel-aged or fruit sour brews. The main goal of our collaboration is to brew beer that will join our forces in terms of fruit usage in beer brewing. Hence, the Fruit Ale. Our choice is the Polish strawberry, whereas the Norwegian’s go for mango. Jointly we have agreed on raspberry which produces intriguing sourness. Join us to meet the brewers from both breweries on Friday at 7:00 p.m. We are going to share some stories about the fruitiest beer we have brewed so far! You are going to learn why we wouldn’t have been able to accomplish our goal without a new centrifuge.

Thursday night is the opening night!