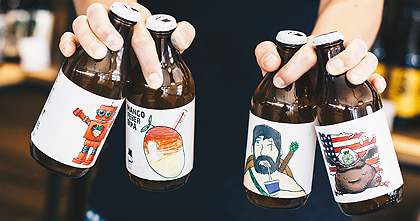 As announced before, we are hosting the Brewski tap takeover right after our August extension and modernization have been completed. Collaborating within the Scandinavian Beer Bridge project with Brewski, we have already received the barrels and bottles bearing their famous labels. The barrels have finished instantly; we have already ordered more bottled beers, which are highly appreciated by our visitors.

In October Brewski is coming to WRCLW for our collaborative brewing. Most of their beers do not need any recommendations.

The bottled beers on offer:

Brewski, one of the most prestigious craft breweries in Europe well known and appreciated for its incredible fruity IPAs. We are going to exchange experiences, show craft Poland to the Swedish brewers and establish a really attractive Beer Bridge. More about the collaboration at www.facebook.com/events/119010695403247/

We are going to start the collaborative brewing in the first half of October. We’ll keep you posted about the specific date. In September we are going to serve new Brewski beers – “Pineapple Unplugged” and “Homeland”. Stay tuned. To learn more about Brewski, its beginnings, Marcus Hjalmarsson, his common sense, ability to focus on his goals and his perfectionism, which takes away the fun but gives extra motivation, go to https://100mostow.pl/blog/2017/07/27/brewski