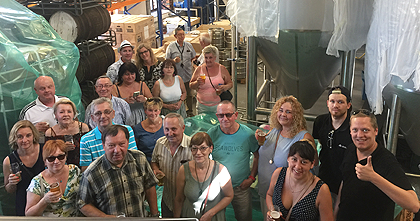 Reunion at Browar Stu Mostów on the Day of the Beer and the Brewer!

The 5 th reunion of all professionals working for the beer brewing industry in Wrocław has taken place at Browar Stu Mostów. In the official part of the meeting we have given an update on the situation on the craft market. This year we have paid close attention to export and successes on international markets.

The meeting took place in our pub overlooking the brewery, which is undergoing the extension project in August. To learn more about our complex investment project, go to: https://100mostow.pl/plany-inwestycyjne- 2017

Just like three years ago former workers of Wrocław-based breweries were the first to officially see the “new Brewery” and take a photo with the impressive new tanks in the background.

That’s when the most emotional comments were made: “It’s so impressive”– Waldemar Jarymek, the CEO of Słodownia Strzegom. “It’s amazing; takes my breath away”– Halina Kucharska, HR Manager at Browar Piast. “That’s what I have been waiting for for a long time” – Czesław Zawiski, the former Director of Browar Mieszczański. Other comments included such descriptions as “a little brewery” and “just the right size of a brewery”. Watch the video of the first impressions on Długosza Street – https://youtu.be/6Dff00GxLT0

We have also shown Concept Stu Mostów – our creative workspace for bakers, chefs, cheese- maker and pastry chefs – that opened last year. At that time we already had a broader idea in mind regarding innovations inspired by the neighbourhood. Today we are proud to offer products produced with the use of beer, wort, malts and brewer’s grain. Two of our flag products, beer pretzels and wort-based mustards, have been awarded the title of the “2017 Best Flavour of Lower Silesia” at the Europe on the Fork Festival. More about Concept at https://100mostow.pl/concept-stu-mostow