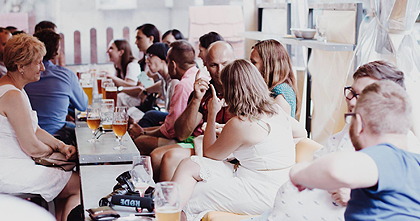 This beer has been created to celebrate the 5 th edition of the Beer Geek Madness – North Side. The freezing North brings to mind sour flavors and its typical fruit, the cranberry, whose powerful sourish flavor and tartness make it a perfect Sour Ale ingredient appreciated by any beer geek. We have saved some portion of this beer to take it a few steps further. We poured the beer into Bourbon barrels, added cinnamon, and left it to age for a few months. Before opening the barrels, we added some fresh lemon peels to give the beer a refreshing and mind- blowing aroma! Our inspiration for the beer was the famous Bourbon-Cranberry cocktail. Give it a try to see if we have succeeded in recreating its taste in beer.

It’s a strong fruity acidic style. Strong extract (as for acidic beer) – over 15 plato, bright in color (the extract comes largely from wheat flakes) and acidified with lactic acid bacteria. The addition of fruit, in the form of pressed juice, intensifies the acidic taste while giving the characteristic cranberry sourness. It is an innovative idea to age it in Bourbon barrels with cinnamon to finish it off with a big addition of citrus peels. Enjoy the first sip!

During the debut weekend we are going to serve the slightly forgotten but really delicious chicken gizzards served roasted with spicy mayo and the summery sweetcorn. Giblets are often found on our menu for their intense flavour. Our home-made mayo is slightly spicy and lemony. Add sweetcorn, malty caramel breading and you are in for a real treat!

To learn more about the beer go to  https://100mostow.pl/salamander-cranberry-sour-ale-bourbon-ba- 2017/