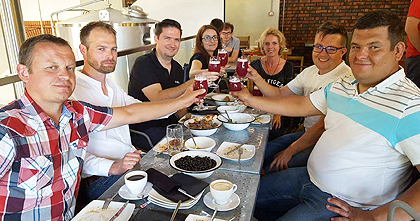 Yet another highly drinkable beer for summertime! Berliner Weisse with a seasonal touch of Polish fruit – sour blackcurrant. In spite of the harvest time, the members of the Polish Association of Blackcurrant Farmers have joined us for the premiere.

Polish blackcurrant beer is going to make it to at least 10 countries. The taste is so exceptional we are going to present the beer at Beer Geek Madness Summer in order to attract the attention of craftsmen and farmers.

“Craft brewing has made an excellent business partner for blackcurrant and berries farmers. Craftsmen need highest quality fruit and our knowledge” – said Marian Gąsior – Member of the Management Board of the Polish Association of Blackcurrant Farmers.

We would like to take this opportunity to thank the Polish Association of Blackcurrant Farmers. Cheers to all blackcurrant and berries farmers. We all hope this year’s harvest is good. We are for cooperating between local businesses and the craft industry. In Poland there are already over 150 craft breweries; we’ll reach 200 soon. Find us. Craft needs excellent quality fruit, skills, and experience in selecting varieties.

Cooperation has resulted in interesting beers that will taste great and promote Poland. It takes a talent of a brewmaker and our competencies in growing fruit which are both our trade mark abroad – added Piotr Baryla, the Chairman of the Association.

That’s exactly it. Right to the point. These are two quite dynamic industries which are going to continue brewing interesting beers to taste great and promote Poland.

Berliner Weisse has been made for it. This cloudy, sourish, low alcohol content wheat beer style historically originating from the northern regions of Germany, specifically Berlin, has been brewed since the 16 th century. Nearly 100 years ago it used to be the most popular drink in Berlin produced by 50 breweries. At one point their number diminished to 2 but thanks to craft brewing the style has been reviving. We are proud to have contributed to its development.

The history of the Berliner Weisse at Browar Stu Mostów is really interesting. It has all started with ART#8 Strawberry Berliner Weisse. The beer we have been constantly brewing and which has set a trend. Recently, the style has been named the most awaited BRLO Brwfest, which has become the basis for ART#9. Let’s remember that we have received one of the gold RateBeer medals for “outstanding achievements in the Berliner Weisse style”. We have worked quite a lot to set and strengthen this trend. All series of Berliner beers has been working for this goal. Today Berliner Weisse has been going through a revival phrase, which could have been noticed at the Wrocław Good Beer Festival.

Very low extract as well as light Pilsner and wheat malts account for the beer’s lightness. Whereas the noble variety of Tettnanger gives the style its almost undetectable level of bitterness and herbal character. It is topped off with blackcurrant sourness.

Polish blackcurrants stand for fully natural fruit of the highest quality. Big amounts of blackcurrant have been added during the late fermentation stage and ageing process. The fruit has given the beer its characteristic flavour and aroma and strengthened its sour profile.

100% natural blackcurrant puree without any preservatives or sugar has been added to a tank and recirculated with a pump in a container used for mixing puree and beer. The mixture has been fermented with brewers’ yeast (fruit fructose is assimilated by yeast), centrifuged in order to separate any particles like stones or peels but to preserve the pectin-related cloudiness. Blackcurrant gives the beer its fantastic colour, flavour, aroma, and sourish touch.

We have started the premiere weekend. Join us to taste it!