Beer brewed in cooperation with the Blackcurrant Farmers Association 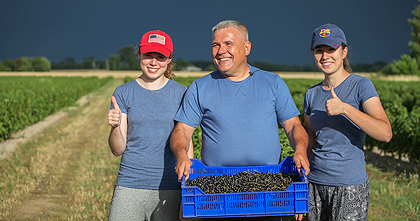 Light, sourish, and wonderfully refreshing beer fermented with the use of lactic acid bacteria with a fruity touch: Polish blackcurrants known to be the best in the world! On top of their amazing colour, taste and aroma, Polish blackcurrants have given the beer its sourish tone. Brewed in cooperation with the Polish Blackcurrant Farmers Association.

Blackcurrant is one of the healthiest fruit. 100 g of blackcurrant has enough vitamin C to satisfy the daily recommended intake. Interestingly, it contains more vitamin C than citrus fruit, lemons, or oranges. Blackcurrant fruit are rich in anthocyanins, or antioxidants neutralizing free radicals which lead to the development of civilization-related diseases, including cancer and degenerative diseases of the eye. Blackcurrant has a positive impact on the eyesight by stimulating microcirculation and improving vision in the dark. It’s eye- opening, isn’t it? Such fruit grown in Poland as blackcurrant, blueberries, raspberries, arnica, blackberries are rich in anthocyanins. That’s the reason why they have always been on the menu of night-shift workers, drivers or snipers. Blackcurrants are often appreciated by athletes for their concentration improving abilities. The latest research points out that blackcurrants help in relieving stress. The list of benefits to our health and wellbeing is long. It’s worth promoting the fruit qualities as it is still an undervalued fruit. Since blackcurrant is grown locally in Poland, we are going to spread the news!

There is no other fruit that could be more Polish than blackcurrant. Although its production is concentrated in entire Europe, Poland is the biggest producer. Another interesting news is that Polish share in the global production equals to 53%! Exactly, that’s half of the world’s production according to International Blackcurrant Association.

The blackcurrant farming sector in Poland is represented by the Blackcurrant Farmers Association, which promotes healthy qualities of blackberries. SALAMANDER Blackcurrant Berliner Weisse is the first beer brewed with blackberries in cooperation with the Association. Good cooperation allows for broader knowledge and interesting beers to savor. At the same time, our collaboration promotes Poland with its talented brewmasters and farmers. These days we are already promoting two of our leading export products.