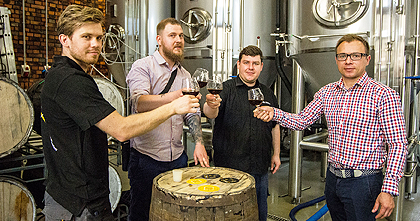 Bringing together the world of beer, wine, and rum!

The bridge between the world of beer, wine and rum! Barley Wine is one of the strongest beer styles. With its high extractivity and the abundance of caramel, sponge cake and honey aromas, the beer style brings to mind wine. As for the world of rum, the beer contains thick and sweet blackstrap molasses, which is produced at the last stage of cane sugar crystallization. It gives the beer the aroma of raisins, candied cherries, caramel and marzipan. The English yeast variety accounts for characteristic fruity flavour and almond aromas similar to those of amaretto or wine spirits. But it is the long ageing process that enhances the aroma over vanilla, coconut, and cinnamon flavours. Jamaican rum releases aromas of fresh tropical fruit, which can be sensed in the beer as well. The oakwood tones and rum tones balance stylish sweetness of Barley Wine creating well-balanced and refined spirit.

The Barley Wine style has its roots in England. The first commercial beer of this type was brewed in the second half of the 19 th century although some trace its origins back to the barley wine produced in Ancient Greece. Anyhow, it is high alcohol content beer of about 10% similar to wine. The rich and malty aroma of the beer brings to mind molasses, toasted bread, honey, almonds, toffee and dry forest fruit. The beer’s sweetness and high alcohol contents make it similar to amaretto or wine spirits. As alcohol carries aromas, during the tasting one should pay attention to the retro-nasal aroma profile. Whereas the ageing process in Jamaican rum barrels oxidizes beer and the barrels themselves account for the beer’s rum-like character. The organizers of the Rum Love Festival have selected Jamaican rum barrels. The barrels are highly aromatic and go back in time. They were first used to age Bourbon, and then Jamaican rum, which has an amazing aroma bringing to mind spices, marzipan, tropical fruit, intense vanilla, orange peel, cane sugar and molasses. This aroma goes exceptionally well with the Barley Wine style producing a refined drink bringing together the world of beer and great rum.

Totalitarian regimes, nationalisms and globalization, and other miss, have resulted in a very limited perception of beer as a light, full, cold drink. Years of hard work have brought about big changes. The analogy is quite strong: adding cola to rum brings to mind drinking beer with fruit syrup. A dead-end street.

That’s how we have become partners to the Festival. What unites us it the will to provide the people from Wrocław with the opportunity to taste excellent quality products and to show them something extraordinary. The festival looks impressive. Our beer is going to mark its presence. Pergola, two days of indulgence, trainings and works run by international rum experts. Concerts, regional cuisine, cigars and, what’s most interesting to us, bartender shows.