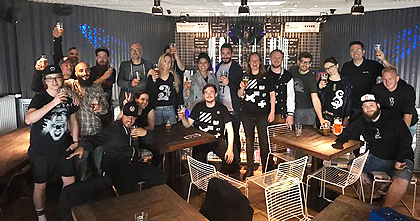 The BRLO Brewery hosts BRLO Brwfest. We got to know each other during the collaborative brewing of ART#8. It has soon turned out that we have a lot in common, including our perception of what craft is. BRLO combines its local business with international collaborations. We get along really well. We visit each other on regular basis. We have participated in the Wrocław Good Beer Festival, Berlin Craft Beer Week, and the opening of the BRLO Brewery.

The festival is organized to celebrate the anniversary of opening the BRLO beer garden. Considering the fact that BRLO opened its BRWHOUSE even before the Brewery itself(just like we did), the date plays an important role. The anniversary has opened up an opportunity to invite 9 fantastic breweries to BRLN. All of them brew interesting beers, share their experiences enthusiastically and actively build craft beer communities. The invited breweries include: Jopen, our guest at WGBF; 40FT (UK); the award-winning White Hag (Ireland); Kinn Bryggeri (Norway); Edge Brewing (Spain); and Bevog (Austria), known as exceptional organizers and active marketers, as well as White Frontier, a young award-winning brewery (Switzerland). The participation of Stone Brewing, the first American craft brewery to open its brewery in Berlin, Europe, has come as a surprise. All breweries have promised to serve amazing beers. There has been great food and live music.

BRLO is a real magnet. Bad weather has not discouraged loads of visitors. As it happens to be in Berlin, the atmosphere has been cosmopolitan. We have been happy to see many Polish craft beer enthusiasts. Our SALAMANDER Imperial IPA has been a dark horse. ART#8 is well appreciated in Berlin. The memories of our collaborative brewing in WRCLW work to its advantage.

Small things bring happiness. ART#8 has been the most awaited beer at the festival. It goes to show that our efforts promoting Berliner Weisse and Polish craft in BRLN have paid off. We are way ahead of many wonderful breweries and beer styles. ART#8 is well appreciated in here. Luckily, we have saved a few barrels! To see the ranking of the event go to events at  www.facebook.com/events/300190950417869

The Beer Bridge established between WRCLW and BRLN has resulted in friendships, meetings, and joint projects. ART#8 has become a trendsetting style, which has given rise to ART#9, and the whole highly successful series of Berliners. The Berliner Weisse style has been going through its revival. As has been noticeable at the WGBF, a large number of Berliner Weisse beers are being brewed these days.