SALMANADER Peach Berliner Weisse makes its debut at the WGBF 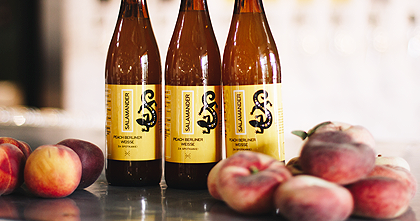 Visit the 8 th edition of the Wrocław Good Beer Festival and celebrate the debut of the peach beer! It’s a highly drinkable style to enjoy in summertime! This is the perfect mix of the symbol of traditional German brewing school, the light, sourish, and refreshing beer, Berliner Weisse, fermented with the lactic acid bacteria and the refreshing aromatic peaches! Very low extract of 9%; grist made of light, Pilsner and wheat, malts only account for the maximum lightness typical of this style. The delicate aroma of honeydew produced by the new-wave German hop variety Huell Melon has been preserved. Taste it!

We’re serving our core offer, which today includes 7 beer styles. WRCLW Pils, Hefeweizen, Schöps and the winner of the bronze medal at the 2016 Craft Beer Competition– WRCLW Roggenbier. SALAMANDER Pale Ale, AIPA and the winner of the gold medal at 2016 KPR SALAMANDER Black IPA. We’re offering beers that will serve our educational purpose. Use the opportunity to invite your friends to taste the difference that craft beer offers. Our core beers include light and dark, refreshing and full-bodied, barley, wheat and rye styles. And the most intriguing of them all: Schöps, which has already become our trademark and core style. We have been aiming at making Schöps available for good. A few days ago, WRCLW Schöps was awarded the title of “the 2017 Best Flavour of Lower Silesia.”

SALAMANDER American Wheat is also returning to taps. American-style wheat beer brewed with the majority of wheat malts, which apart from its light colour gives the beer a subtle, bready, wheat-like character. American hop varieties account for balanced bitterness, and interesting citric-grapefruit aroma brought about during the beer ageing process. American Wheat is a perfectly refreshing and drinkable beer to enjoy on a summer day. That’s a comeback we’ve all been waiting for!

SALAMANDER Imperial AIPA is way stronger than AIPA thanks to a stronger extract, higher alcohol contents and more hops! Less density and maltiness (than one may expect judging from the extract) along with light grist highlight the leading role that hops play in Imperial IPA.

SALAMANDER Cranberry Sour Ale. Take a trip to the North and enjoy a stronger taste of the sour top-fermentation beer brewed with cranberry juice. The beer’s clear sour profile has been produced by selected lactic acid bacteria and balanced with cereal foundation. Cranberry juice brings out the sour taste and accounts for a refreshing fruity flavour and unique bitterness.

Another one not to be missed is our beer brewed in collaboration with the Jopen Brewery. Jopen/Browar Stu Mostów Polished Black Gold – Baltic Porter 22 blg 9.2 % alc. 47 IBU. It’s been the first ever collaboration between Jopenkerk and a Polish brewery. The Baltic Porter with rye grist. Heavyweight in the Porter category!

There are more Jopen beers to be found at our stand as part of the Craft Beer Bridge established between Poland and the Netherlands:

and several other interesting collaborations not to be missed: