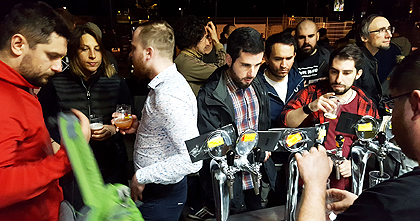 We have participated in the third edition of the Beerweek Festival. The atmosphere was really welcoming with the weather clearing up every day. The line for our beers seemed to have no end. There was also time to answer your questions about our beers and plans. The bridge between WRCLW and KRK was lit up over the festival’s three nights. Our stand was the first one to attract visitors right after they entered the Cracovia FC stadium – http://www.facebook.com/BrowarStuMostow/photos/a.482485215213862.1073741828.478718552257195/1192159357579774/?type=3&amp;theater

Instead of writing about football or the weather, which successfully discouraged visitors on the first two days of the festival, we’d like to share some thoughts on the festival’s formula from our perspective. The festival’s formula makes sense when we open more for new customers. Craft beer lovers enjoy good beers every day. No doubt the formula of the Wrocław Good Beer Festival and the fact that it is so actively promoted by the city is the reason why it is so well-appreciated by visitors.

We’ve heard it before that people from WRCLW and Lower Silesia identify more with local traditions. Everyone has experienced it in KRK. Our representation at the festival was strong. There was no other city from Poland so well represented at the festival. Bravo WRCLW!

From the perspective of WRCLW, the city where brewing traditions go back 800 years, the answer is simple. Of course, there is more place! Remember that Wrocław used to be called Little Bavaria. In early 19 th century Wrocław there were 1200 pubs, which means one pub per 50 dwellers! In the 1830s there were over 100 pubs and the number went down to 70 by the end of that century. It cannot be denied that the city has strong brewing traditions and local identity. The fact is that beer used to be an everyday part of our lifestyle. People living in Wrocław used to visit pubs on regular basis. It used to be a ritual. We’d like to bring it back. There is no need to follow Czech or British traditions as we’ve got our own. We believe that small breweries producing beer on a local scale must keep opening. Our goal is to promote them and keep our fingers crossed for craft breweries in WRCLW and beyond!

We’re drawing inspiration from the long-established brewing traditions in WRCLW. That’s our standpoint. We’re establishing a bridge between the present and the past to connect with those brewers who produced good beer and made an effort to raise its quality. We’re making history! And it’s just the beginning of our craft resolution! The history is repeating!

Speaking about history, it’s worth mentioning Salamander, a long-established beer drinking tradition and a toast started in WRCLW in early 19 th century. The tradition was born and cultivated among German students associations and it’s just a matter of time when the toast for friendship and respect is going to revive.

There are many occasions to do so in June. One of the most important events, the Wrocław Good Beer Festival, is coming up! Join us at any event whether in Kraków, Gdańsk, Lviv or Einthoven. See you in WRCLW in two weeks!