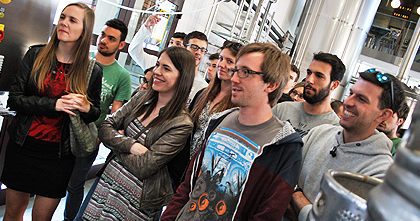 Celebrating the Day of the Brewer!

We’re organizing a day tour of the Piastowski and Stu Mostów Breweries to mark the turn of an era. We couldn’t imagine a more symbolic walk in the City of Good Beer.

At 5:30 p.m. we’re going to rediscover the history of the Piastowski Brewery that goes back 130 years. Established in 1872 under the name Brauerei Pfeifferhof Carl Scholtz by a restaurateur and entrepreneur Karl Scholtz, the brewery was famous for traditional brewing with the use of innovative solutions. What can serve as an example is the fact that the granary was at the ground floor while barley was delivered to the first floor. This was an exceptional innovation in the whole Europe at that time. The brewery was built near the Odra river so as to allow beer to be easily imported. The brewery survived both Festung Breslau and nationalization process. After the II World War, its name was changed into Browar Piastowski – Browary Dolnośląskie “Piast” where brewers who moved from Lviv used to work. In November 2001 the brewery was bought by the Danish Carlsberg, which turned the brewery into a bottling plant. In 2004 three buildings of the brewery, the headquarters, bottling plant, and lagering cellar, were entered into the register of objects of cultural heritage, while others were demolished. When the brewery was closed down in 2004, the city faced a decade without a city brewery.

Join us at 7p.m. We’re going to show you the differences between craft brewing and commercial production. We’re going to focus on state-of- the-art technological solutions used by the most prestigious breweries in the world. We’re going to explain how the production process works and how each stage of beer production influences beer quality. The Day of the Brewer also provides the opportunity to see our latest investment, the centrifuge, which improves beer quality, specifically important for beer styles brewed without yeast such as Pils. Centrifuge allows for standardizing the cloudiness of yeast-based, hazy beers. We could use it even to brew Hefeweizen. There are only a very few craft breweries that have a centrifuge as part of their equipment. It is usually replaced with the filtration process. To learn more about our 2017 investment plans go to 2017 Investment Plans. Plan inwestycyjny 2017

The great news is the tour includes beer tasting. We’re also offering the opportunity to talk to Fryderyk Krukowski, the long-term director of Browary Piastowskie, and Hanna Głuchowska, the Spokesperson and Marketing Manager at Browary Dolnośląskie Piast. History repeats itself.

The tour costs PLN20 (including the guide and two 0.3 beers) to be paid at the Brewery before the tour takes place. Limited enrollment by email.

If you’re interested in joining the tour, please email biuro@viptravelwroclaw.pl by Friday 19 May 2017 with your name and phone number.

The tour will be filled with emotions. Watch the video to see what the former Piast Brewery employees felt when the production ceased. These testimonials make us all appreciate what we have and how to take the best of it. Wrocław takes pride in 800- year-old traditions and beer that is part of our identity and culture. GoWRCLW!

Here is the video titled “Wrocław longs for the old days”:

The event in December 2014 was quite symbolic and breathtaking. “It takes my breath away. I had tears in my eyes when I met my former colleagues from the Piast Brewery. It’s amazing to see that young people work so hard to open the brewery and revive brewing traditions in Wrocław.” – said Halina Kucharska, HR Manager at Piast Brewery. Here is the video featuring the first visit on Długosza Street titled “First impressions of Wrocław breweries”:

The tour is taking place as part of the 8 th edition of the Wrocław Good Beer Festival. There are a number of city walks tracing the brewing traditions of WRCLW. The first tour took place at August Weberbauer Brewery, next on the list are: Haase, Friebe and Mieszczański breweries. The upcoming tours include Engelhardt brewery and local pubs along the river bank (27 May at 2 p.m.) and the former beer lagering cellar of the Conrad Kissling beer pub (3 June at 3 p.m.)

It’s more than taking a city tour. It’s rediscovering the city’s 800 years of brewing traditions. We couldn’t be happier. Find out more at Travel Wrocław and Wrocław Good Beer Festival.

VIP Travel Wrocław and Wrocław Good Beer Festival will take you on tours of former breweries and beer pubs. “For the last eight years, Wrocław Good Beer Festival has been actively promoting beer and its fascinating history, culture and community behind the craft brewing industry! Beer has been part of the city’s history for ages. No other drink has become part of the city’s history and identity. The first tour has been organized at the August Weberbauer Brewery, the first brewery in Wrocław to use steam engines.

The Haase brewery used to the biggest brewery in Wrocław (100 Krakowska Street) which today hosts a pub Klub Zaklęte Rewiry. The tour opened up the opportunity to visit the buildings of the former brewery, have a sneak peek into the normally closed spaces and understand the history of the famous family of brewers. We have been told the fascinating story of Georg Haase, the heir of the brewing empire, the owner of the resort in Polanica-Zdrój, the tenant of the famous restaurants in Wrocław (including Piwnica Świdnicka) and the author of the work titled “Against Total Abstinence” promoting the benefits of beer drinking.

Etablissement Friebeberg used to be the most famous entertainment complex in pre-war Wrocław. Established in 1854 in the southern district of the city, it showed nothing but grandeur: a huge concert hall, view point, icehouse, barrel storage and a five-hectare garden with concert shells and colonnades. We followed the former beer trail along these streets: Sztabowej – Łączności – Pretficza and Powstańców Śląskich. During the tour, we rediscovered the former beer lagering cellar and icehouse owned by Carl August Friebe, a renowned brewer from Wrocław and long- term tenant of the Piwnica Świdnicka restaurant.

Our tour guide was Michał Karczmarek, a certified tour guide of Wrocław and beer enthusiast.

Browar Mieszczański is regarded as the jewel of the industrial architecture of the 19 th century city. It is also one of the best preserved buildings which survived the demolishment plant implemented in the early 21 century. First, it was the place where beer was brewed for local pubs and restaurants which did not want to promote commercial beers. After 1945 the brewery changed its name into Browar Mieszczański, and next it became part of the Wrocławskie Zakłady Piwowarskie.

Here are the dates for the upcoming tours: 27 May at 2.00 p.m. – The Engelhardt Brewery and local beer pubs around the Odra river from Dąbie to Bartoszowice; 3 June at 3.00 p.m. – the former beer lagering cellar of the Conrad Kissling brewery. You can’t miss it! More about the project at: