Browar Stu Mostów
back on taps on Łazienkowska Street! 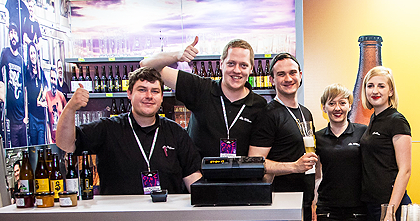 This year’s edition of the Warsaw Beer Festival hosted numerous Polish breweries, and legendary breweries representing the Scandinavian craft industry: Brewski from Sweden, Lervig from Norway, and Evil Twin from Denmark. The atmosphere couldn’t have been more welcoming.

There was the total of 350 taps, 800 beers and nearly 15 food trucks. “Beer guides” wearing special shirts gave advice to craft beginners, who could learn how to brew beer at home, or take part in a table football contest.

For us, the festival season opened a few days earlier with Barcelona Beer Festival. We promoted WRCLW Schöps, SALAMANDER Black IPA, and ART#11 Double Cherry Rauchweizenbock – the first beer brewed in collaboration between the Beer Bridge and Naparbier. More at  https://100mostow.pl/blog/2017/03/25/bbf-2017/

We’re getting ready for the 8 th edition of the Good Beer Festival taking place between 9 and 11 June 2017 in Wrocław, the oldest craft festival in our part of the world, the place where Brewing Workshops were established and most Polish craft breweries made their debut. The festival is an opportunity to show craft brewing as an essential part of our identity and lifestyle in WRCLW.