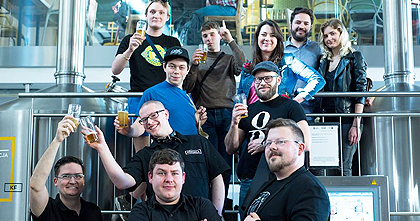 It was a great pleasure to host so many participants, international guests, and brewers at the BGM#5. We have exchanged experiences with such hospitable and open-minded beer enthusiasts. It’s beer that brings us together!

This year’s edition of the Beer Geek Madness has been record-breaking. Many participants have agreed that it has been the best edition of a beergeek event in Poland. High quality beers, good organization, excellent food and music have made their mark! Bravo!

SALAMANDER Cranberry Sour Ale has made its debut at the event. The beer’s style has been inspired by the theme of the fifth edition of the BGM – North Side. We’ve designed it as a trip to the North in the form of a sour top-fermentation beer with cranberry juice. It’s a strong fruit sour ale with a strong extract (as for sour beers) – over 15 plato – and strong acidity produced by lactic acid bacteria. The beer’s clear sour profile has been produced by selected lactic acid bacteria and balanced with cereal foundation. Cranberry juice brings out the sour taste and accounts for a refreshing fruity flavour and unique bitterness. Cranberries have proved to be the perfect ingredient of Sour Ale. Taste it!

The beer has been ideally paired with pretzels with cheese and chilli sauces inspired by the North Side, the theme of the Beer Geek Madness#5. The beer has earned a name for itself as the Viking’s treat, the desert of the North, the Cranberry Valkyrie, or the true flavour of the Nordic fiords.