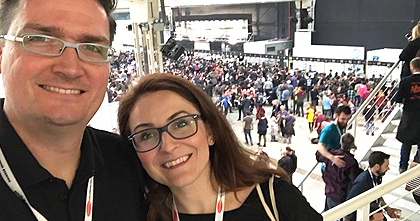 As we could present no more than 2 beers, we decided to go for Schöps and SALAMANDER Black IPA, the winner of gold medal at the Craft Beer Contest, which made their debut in Spain. Then, the news arrived that the organizers wanted us to present the first Polish-Spanish beer brewed in collaboration with Naparbier. And so we’ve been awarded a wildcard and brought ART#11 Double Cherry Rauchweizenbock to the Barcelona Beer Festival.

Our participation in the BBFestival has been part of the collaboration with Naparbier known as the best craft brewery in Spain. Our main objective was to exchange experiences and enrich beer culture through collaborative brewing, promoting culture and lifestyle. For us winning over Barcelona has been a strategic move in our expansion over the peninsula. Another measurable goal was to plan promotion activities of our beers (more than three) and finally to choose a distributor.

It’s been the first collaboration between Polish and Spanish breweries. What a historic event for the Polish craft! The Spanish market is really interesting. 2/3 of all beer drunk in Spain is consumed out in bars and restaurants; only the Irish have outcome this result. Like we have said before, it seems that this year Spain will outdistance Poland in beer consumption and will soon become the 3 rd beer market in Europe after Germany and UK.

PS. Before starting Browar Stu Mostów, we used to live in Spain for a year. We feel highly sentimental about it. We believe it’s worth inspiring each other. As the saying goes, birds of father flock together.