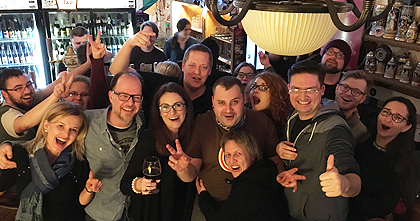 We’re proud to announce the debut of an impressive style that has created craft bridges cross the best beers from all over the world: the Baltic Porter. Thanks to this style, which has drawn the attention of the Dutch brewers, we have established collaboration with our Dutch partner and now the beer is exported to three continents. Would it be so successful without our business partner? Most probably not but it’s not the point. We’re proud of the success and the fact that what we’re doing is enriching the Polish craft: our experiences and the image of Polish brewers.

More about the beer at https://100mostow.pl/jopen-rye-baltic-porter/

This was an amazing weekend. On Friday night, we had a great time at Piwna Stopa pub in Poznań, which has recently won the title of one of the best pubs in the world by Ratebeer. Then, we moved to BrewDog in Warsaw, the pub of the craft icon and The Best Brewery in Scotland 2016. This was a joint tap takeover for Browar Stu Mostów and Jopen.

Visit us to taste it!

Jopen is one of the oldest and most prestigious breweries in Europe established years ago with a mission to recreate the brewing industry in Haarlem. The brewery has successfully recreated traditional brewing recipes including the famous Jopen Koyt based on the recipe dating back to 1407. The name comes from beer barrels that were used in Haarlem in the Middle Ages (and not from the word meaning “a hat”). Jopen believes in local identity and has turned it into its selling point. Another exceptional beer based on a recreated recipe is Hoppenbier (hops beer) – Belgian Ale. It’s one of the first “Western” beers brewed with the use of yeast in accordance with city regulations from 1501. Today it’s #1 by 2016 World Beer Awards.