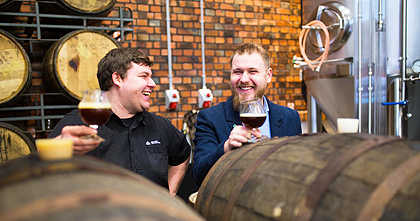 Visit the first in Poland Rum Festival to taste our exceptional beer: WRCLW Barley Wine aged in 8- 10-year-old rum barrels from Jamaica used to store the English-style strong, heavy and full- bodied rum (cinnamon, all spice). Quite spirited! Perfect for us! We’re preparing this exceptional beer for the Rum Love Festival taking place in Wrocław in June!

We have been inspired by the rich rum culture to reflect on the long way we’ve come in craft brewing. When we started, there was still a very narrow-minded perception of beer and its qualities. We believe that craft may be of value to rum enthusiasts and experts, who could observe our actions taken to broaden the mono-taste perception. Everyone has agreed that the starting point was similar.

Totalitarianism, nationalism, and globalisation have created the perception of beer as light, full, and served cold. It has taken years for the craft industry to change this misconception. The analogy is really strong. Adding coke to rum is like adding syrup to beer. A dead end street.

We have become partners to the Festival. Since the very first meeting our common goal has been to show unique and exceptional flavours to WRCLW. The Festival sounds impressive. The Caribbean in the heart of WRCLW. We’re providing a strong beer touch.

Pergola, two days of tastings, workshops and trainings run by rum experts from all over the world. Concerts, regional cuisine, cigars, and the most interesting of all – bartender shows.

Along with the organizers we’re preparing a bartender contest. We’re shortlisting beers to create a recipe of the official cocktail of the 2017 Rum Love Festival. The recipe can but doesn’t have to contain beer. Keep your fingers crossed 🙂