Brewing
with the Naparbier.
Next: Tap Takeover in Poznań and Wawa 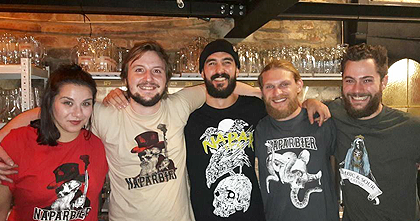 Join our collaborative brewing with Naparbier

We’re building the Beer Bridge between WRCLW and Naparbier, one of the best craft breweries in Spain. Our collaborative brewing is taking place on Thursday January 26 and we’re celebrating that evening. It’s a great chance to meet their main brewers: Juan Rodriguez from Pampeluna and Beinat Gutierrez from NaparBCN. We’re going to talk about the cooperation while serving Spanish beers.

That’s a real treat for beer geeks and excellent promotion of the craft culture far beyond beer enthusiasts. This project is a wonderful opportunity to promote Spanish culture and life style. If you have an idea of how to promote Spanish culture and lifestyle, contact us. We’re open for cooperation and promotion of the Spanish film, dance or language. We’re also planning a kind of “culinary bridge.”

We’re going to talk more about our cooperation, quality brewing, and craft values that inspire us to build bridges. We’re going to serve our beers and the best ones from the Naparbier offer.

It’s the first collaborative brewing between Poland and Spain. And as such, it’s a remarkable moment for the Polish craft. The Spanish market seems so interesting to us. It’s has come as a surprise that 2/3 of the beer drunk in Spain is consumed in bars and pubs. The only nation that has reached a better result are the Irish. That’s the reason why we are keen to promote such consumption not only in WRCLW but beyond. Clearly, Spain is going to outdistance Poland this year and become the 3rd beer market in Europe (right after Germany and Great Britain). Even though consumption is by half lower than in Poland, consumption has been rising by over 1 mln hl a year. Spaniards import 6.5 times more beer than Polish people. The beer brewed collaboratively is the first step onto the Spanish market. GoWRCLW!