On the way to the opening of BRLO brewery 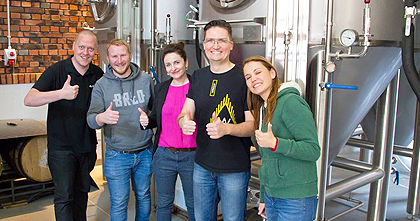 Opening of the BRLO brewery

We have been invited for the opening of the BRLO brewery. The WRCLW – BRLN bridge has been expanding. For the last 1.5 years we have made friends, met many brewers, and staff from various pubs and excellent shops. We first met the BRLO team in August 2015 when we organized tap takeover in Hopfenreich – Craft Beer Bar Berlin and invited everyone to visit the 3rd Polish-German edition of the Beer Geek Madness, BGM3, in WRCLW. Our first collaborative brewing in WRCLW was their first international project. The collaborative ART#8 made its debut at the Wrocław Good Beer Festival. That’s exactly how the we embarked on the adventure with Berliner Weisse. Next, we went to Berlin Beer Week to promote Schops.

Every meeting is an opportunity to learn more and make new friends in Berlin. The bridge has been expanding. Visit WRCLW for a weekend getaway or the best craft beer events: 5th edition of Beer Geek Madness (1.04) and the 8th edition of the Wrocław Good Beer Festival (9-11.06).
—-