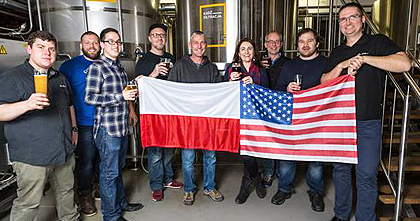 Wrocław is the most often chosen city for international collaborations!

Browar Stu Mostów – 5, Pinta – 3, Browar Kingpin – 2. There were 22 international collaborations in 2016. Compared to 2015, there were 12 beers brewed by our breweries with European partners only. More information in our article “Year in Review” at: http://www.zwrotnica.com.pl/2016/12/piwne-podsumowanie-2016.html 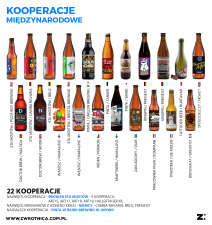 ART#5 Imperial Apricot IPA, January 2016.
We were the first brewery in Poland to cooperate with the American brewery Pizza Boy Brewing from Pennsylvania, the winners of the silver medal at World Beer Cup 2014 in the experimental beer category. We have chosen a legendary style and added apricots.

ART#7 Red German IPL. India Pale Lager, or a much more hopped version of stronger lagers brewed in collaboration with Camba Bavaria, one of the most appreciated German breweries. For the Bavarian brewery, our joint brewing was the first international collaboration. Here is the coverage: https://youtu.be/seWpNGiMoYU

ART#8 Strawberry Berliner Weisse brewed in Berlin-based BRLO brewery. Weisse is a cloudy, sour, wheat beer style with low alcohol contents. This style has been coming back to taps recently. ART#8 had its debut at the 7th Wrocław Good Beer Festival. More information at https://100mostow.pl/blog/2016/05/18/berliner-weisse/

ART#9 Oatmeal Hoptart. Collaborative brewing with the American brewery Brewing. More information at https://100mostow.pl/blog/2016/07/27/art9/ Berliner Weisse with oatmeal flakes and abundance of Australian hops. Today the beer is in the top4 of all times in the Berliner Weisse category. ART#9 won the bronze medal in the category of Speciality Beer: Other Sour Ale at 2016 Brussels Beer Challenge. The beer also won the title of the Debut of the Month by PolskieMinibrowary and the Craft Beer of the Month by Polski Kraft as well as won the ranking of the Berliner Weisse by Piktor at Il Piwo. Most of all, it is in the top4 Berliner Weisse of all times by RateBeer.

Hallertauer IPL Collab. Our first collaboration project outside WRCLW. We brewed invited by Camba Bavaria. The foundation is the Heller Bock beer style. Usually it is not hopped much but with traditional Bavarian hops. We have added quite a lot of new wave hops from the Hallertau region– Huell Melon and Blanc. More at https://100mostow.pl/blog/2016/11/21/hallertauer-ipl-collab/

More about the beer that is still available on Długosza Street and in selected pubs at https://100mostow.pl/hallertauer-ipl-collab/

We have also brewed in collaboration with Jopen Kerk. More information at: https://100mostow.pl/blog/2016/10/29/wrclw-hrlm/ The beer is going to make its debut.

The Beer Bridges allow us to brew even more interesting beers and promote WRCLW as an important place on the brewing map of the world. Only in January itself we’re going to host Jopen in WRCLW and other stars on the craft scene. Stay tuned. Visit us in WRCLW!