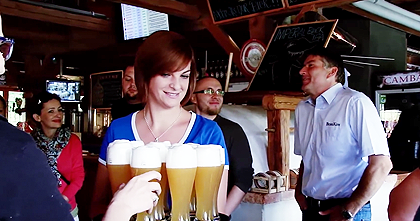 Join us for an amazing debut!

We’re happy to present our first beer brewed in collaboration outside Wrocław. We’ve been invited by Camba Bavaria to the world’s biggest hop growing region. Our visit has sparked off a debate about the freedom of brewing that Polish breweries enjoy. Contrary to Poland where there are no limits as to beer brewing, Bavaria faces the challenges of the 500-year-old Beer Purity Law, which bans using other spices than hops. It was introduced to ensure the quality of German beer. The meeting has inspired us to explore the topic of our competencies and developing hop fields in Poland. This is the reason why Hallertauer IPL – brewed in cooperation with Camba Bavaria is going to make its debut at the Lublin Craft Beer Expo on November 25.

Another beer that can’t be missed in Lublin is WRCLW Schops brewed from the Lomik hops from Lublin. This historical beer has been recreated as the symbol of Wrocław brewing traditions. The event in Lublin will also open up the opportunity to remind visitors of the fact that the earliest written records of hop growing and drying date back 750 years. Apparently, hops were used in Poland much earlier than in other Western European countries. We’re coming to Lublin with the idea of promoting brewing traditions, of which our WRLCW Schops is an excellent example.

Hallertauer IPL is the first beer brewed outside Browar Stu Mostów in cooperation with the first brewery we collaborated with – the Camba Bavaria team. The bridge between tradition and modernity stands strong. This time we have decided to work on the Heller Bock style refining it with interesting newwave Bavarian hopping.

Our beer is based on the Heller Bock style, which is lighter than its “regular” counterpart. This style is of golden colour, sweeter, and has higher yeast contents on top of clear year profile. Brewed in winter months to boost your mood at cold nights, the beer is usually not hopped much but with traditional Bavarian hop varieties. We have decided to add quite an amount of newwave hops exclusively from the Hallertau hop growing region: Huell Melon and Blanc.
These are the Hallertau hops that account for our interpretation of the style. Slightly more bitter than the traditional version but still very pleasant flavour. The aroma of the newwave Hallertau Blanc hops releasing the surprising and intense aroma of white wine is completed with a subtle melon flavour from the Hallertau Huell Melon hops.

Beers brewed in collaboration with Camba Bavaria make a “mini-series” starting with ART#1 Doppel Weizenbock German IPA, an unusual mix of apparently incompatible beer styles. The outcome was spectacular: among Top50 weizenbocks according to the RateBeer portal. We’ve followed this trend with ART#7 German Red IPL. Our goal was to show that almost identical hopping may produce a totally different effect in a red lager. The latest beer grows out of this tradition. It is a light bock (Helles Bock) in a refreshed craft version brewed with newwave hops from Bavaria releasing the surprising aromas of white wine and melon. It’s a fresh take on a traditional style.

We are known for taking the best of any brewing school. The German one is famous for traditions and excellent beers. Their professional production makes a great foundation for beer experiments. To brew newwave beers one needs to understand traditional brewing first. This is exactly what’s happening in Germany these days; perhaps slower than in Poland but at a steady pace. We need to remember how lucky we are not being in any way restricted when it comes to beer brewing.

This beer style is dedicated to enthusiasts of traditional beer styles who find the currently available light bocks a bit boring. It is also recommended for this style’s opponents. When they taste this lighter version brewed with a similar hopping, which is hardly available in Poland, they are likely to change their minds.  Enthusiasts of newwave beers won’t be disappointed as well. This is an interesting take on a traditional beer style that keeps you warm in winter evenings. Visit us to taste it!

The beer premieres at our Brewery on Thursday. The Polish debut takes place at the Lublin Craft Beer Expo on November 25.