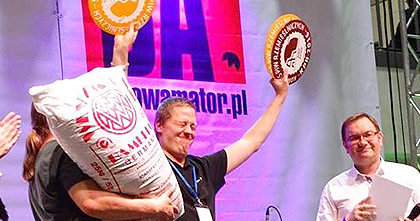 SALAMANDER Black IPA and WRCLW Rye RIS BA have been awarded gold medals, and WRCLW Roggenbier has won the bronze one. It is the best result 300 km way from the chimney! Our Brewery has been one of the three which have won two gold medals! To top it off, Lower Silesia has ranked at the top. What a fantastic weekend! Congratulations to all participants! There were 324 beers from 83 brewers competing in 30 categories in the Polish Craft Beer Competition.

SALAMANDER Black IPA  has won the gold medal in the Black IPA / Cascadian Dark Ale category (14-22ºPlato). Although the name of the category is still controversial, everyone recognizes that it refers to dark, even black in colour, strongly hopped ale.

WRCLW RYE RIS BA Series  has won the gold medal in the highly prestigious category Imperial Stout / Porter (18- 30ºPlato) which included RIS, Barrel Aged RIS/Porter, and Imperial Porter. It is appreciated by beer lovers for its most extreme qualities. It is the strongest, darkest, most roasted and hoppy beer. This category also includes barrel aged beers. The award has coincided with the Stout Weekend on Długosza Street. Surly, it is a great opening of the fall and winter season.

WRCLW Roggenbier  has won the bronze medal in the Rye Beer category which included Roggenbier, Rye Ale, and Rye IPA. All of these beers have been brewed with rye, which for a long time has been undervalued. However, over the last few years an entire beer concept has been based on rye.

We’d like to congratulate all winners and organizers. The Poznań Beer Expo did an amazing job to promote “culture, traditions and the contemporary world of craft brewing.” Thanks to all who visited our stand. See you in WRCLW!