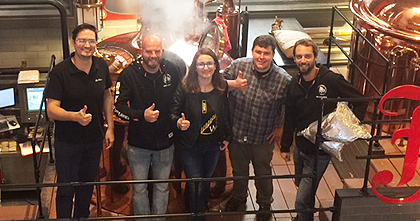 Collaborative brewing with the Jopenkerk brewery from Haarlem near Amsterdam

Jopen is the world-class brewery and the most often bought Dutch craft beer worldwide. Their export markets include: the USA, Russia and China along with a distribution network across Europe. Established in 1992, Jopen has been one of the founders of the European craft revolution.

When it comes to the idea of craft, we are definitely on the same wavelengths as the brewery’s founders, Michel Ordeman and Lydia Zoetman. We met to start our collaboration project at their beautiful brewery JopenKerk, which was also visited by Tomasz Kopyra a few days ago. The lively brewery is the place where tourists can observe the production process, get sensory experiences and talk to brewers themselves.

The modern brewery is equipped with state-of-the-art technological solutions. Being located in a historic building, Jopen combines traditional and new-wave approaches to create opportunities for craft beer.

The brewery is of an urban character. Their aim is to recreate brewing traditions in Haarlem. Since the very beginning, they have focused on recreating native and regional styles. The owners have shared an interesting story of a long-established competition between the brewing and textile industry for “water”, which was finally won by the first. We were lucky to taste Jopen Hoppenbier (hops beer), one of the first beers in the West brewed with hops according to city regulations from 1501. As for the classics, we were also served herbal beer and the renowned Jopen Koyt, or jopen beer based on the recipe that goes back to 1407. The name comes from beer barrels which were used in Haarlem in the Middle Ages (and not from the word which stands for a hat).

The history of Jopen is actually based on historic beers. It was a bit easier for them to recreate the style as the recipes were preserved in the Netherlands. All it took was to find them in the city archives in Haarlem. Still, the fact is that the brewers believe in and cherish their local heritage.

The aim of the meeting was to share experiences and familiarize the Dutch with Polish traditions. Our hosts noted the presence of our beers on their market. Our beers are available in Haarlem and well appreciated in the Netherlands. We’ve been on offer in Bavaria, Berlin, and the USA. Our collaborative brewing with American breweries has done a lot to spread the word. Our aim was to brew a beer that would bring to mind Poland and that we could distribute on a wide range of markets. In short, we are open for cooperation

For now, the joint project will ensure the distribution of our beer to many European countries and in the USA. We’ve agreed on the style: traditional, historic, and very  classic. We’ve designed the recipe. We brewed 6 beers in 3 days. The project will make foundations for the great promotion of Polish craft set for January 2017.

To get a sense of the pub’s ambience, please read more at Tomasz Kopyra’s blog