Michał Czekajło in the finale
of 2016 Polish Culinary Cup 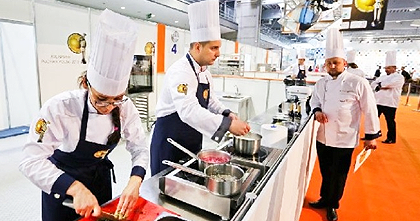 They made it to the grand finale! Today they’re going to fight for the title of “the Best of Best” on the Polish culinary scene. Karolina Wiśniewska and Michał Czekajło, our Chef, as her support. To try one’s hand at the Polish Culinary Cup, it is required for participants to win one of competitions selected by the PCC Council. As the winner of the 4th edition of Bory Dolnośląskie Culinary Festival “Ale Pasztet”, Karolina secured her place at PCC and picked Michael as her supporting chef. Who wouldn’t? 🙂

Chefs participating in the Polish Culinary Cup will be asked to cook a starter, the main dish and dessert, which is likely to be decisive in selecting the winner. Introducing dessert as an additional dish to the competition aims at raising the standards and verifies cooking skills in more detail. It’s certainly an attractive idea!

The objective of the Polish Culinary Cup is to discover culinary talents and find “the Best of the Best.” Since its beginnings, which go back to 2000, the PCC has been developing and winning more and more appreciation by the culinary scene. The competition is recommended by the World Association of Chefs Societies. The Ministry of Agriculture and Rural Development is a strategic partner of the event.

The jury comprises authorities of the culinary world including chefs representing Michelin-starred restaurants. So far the competition has been judged by such renowned chefs as: Gissur Gudmundsson, Armand Steinmetz, JeanBernard Mahut, Malin Söderström, and Loïc Malfait. Polish judges: Zenon Hołubowski, Jerzy Pasikowski and Jarosław Uściński voted in the PCC Finale. Let’s see what it took to get there.

200 chefs participated in 13 competitions nominated to the 2016 Polish Culinary Cup. They prepared 2288 portions of dishes. Let’s recap: Karolina, the chief of our chef, won the 4th edition of the Bory Dolnośląskie Culinary Festival “Ale Pasztet” in November last year. The festival promotes the culinary potential of the Lower Silesia region. The task was to prepare a pate as a snack and the main dish of quail, mushroom, honey, forest fruit and potatoes.

As for the evaluation procedure, the same evaluation criteria and grading scale are used in the Finale in Poznań as well as all other nominated competitions, which is to standardise the evaluation process and make it more transparent. The winner gains the title of “the Best of the Best.” Let’s keep our fingers crossed!