Guests from 20 countries and 6 continents
celebrate Schöps’ come back 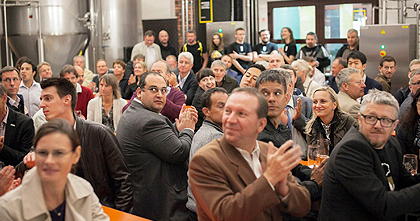 The wheat symbol of Wrocław returns to the city after 250 years. The premiere took place at the Brewery last weekend. The guests included beer enthusiasts, brewers and technologists from all over the world: Czech Republic, Germany, Austria, France, the Netherlands, Belgium, Denmark, Great Britain and Ireland, Bulgaria, Romania, Macedonia and Croatia, Slovenia, Italy, Switzerland and Portugal. There were visitors from the USA, Uruguay, Venezuela, Australia, South Africa and Japan. The turnout was incredible. The legendary beer worked magic. It’s an event Polish brewing scene hasn’t experienced before.

The first to taste Schöps were the Ambassadors of the project to recreate the beer style representing each district of the city as well as special guests of the EBC Symposium including: Prof. Józef Błażewicz and Prof. Joanna Kawa-Rygielska from the Wrocław University of Life and Environmental Sciences, the head of the first in Poland post-graduate programme in the brewing industry; Prof. Ludwig Narziss from TUM Weihenstephan, the legendary university educating Bavarian brewers established in 1868; Prof. Mogens Larsen Andersen from the University of Copenhagen (established in 1479); Prof. David Cook from University of Nottingham; Dan Griffiths from the London Institute of Brewing & Distilling; Alexandr Mikyška representing the legendary Research Institute of Brewing and Malting (1887), Aleksander Poreda, PhD, from the University of Agriculture in Kraków; Tiago Brandao and John Brauer from The Brewers of Europe, organisers of the EBS Symposium in Wrocław.

Naturally cloudy, Schöps is of dark orange colour. Its sweet smell brings to mind honey. The strong touch of nutmeg is balanced with a slightly acidic aroma in the background. The very first sip releases the beer’s complex malty aroma of caramel, sponge cake, and freshly baked bread, which grows into a honey-nutmeg nectar. There is low bitterness level caused by thermophilic lactic acid bacteria that used to live in the wooden barrels where beer was stored. There is a sour-sweet finish with a longer lasting trace of dry fruit.– says Mateusz Gulej, the head brewer at Browar Stu Mostów, member of the international team responsible for recreating Schöps.

Tremendous effort. Excellent promotion of Poland, Wrocław and Browar Stu Mostów. The project of bringing back the symbol of the city’s 800-year-long brewing traditions follows actions taken by both beer and the city enthusiasts. Schöps is part of the city’s history and identity. And it has come back home again!

More information about the beer style at: https://100mostow.pl/schops

More about the project to recreate the beer style at: – https://100mostow.pl/projekt-schops