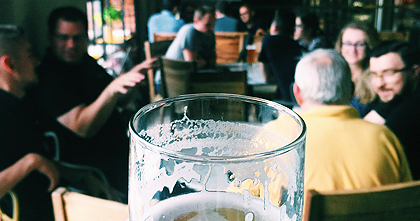 The Brewery’s Pub among 2.0 breweries

by Justyna Adamczyk – the editor-in-chief of the Yellow Guide Gault & Millau. Poland has been following a trend for those forced to spend summer nights in city centres. While wine bars can be found almost everywhere, it’s high time for breweries!

What has replaced the trend of multitaps, or pubs where several beers are available on taps but snacks are below average, are breweries in 2.0 version. These are new, well-thought-out places in terms of design and recipes.

The trendsetter was the once legendary Spiż located in Wrocław’s Old Town. The underground pub boasted shiny beer kegs; laid-back waiters served local beer while chefs offered the most famous dishes of the 90s. Although the establishment is still in operation today, it has nothing in common with recently springing up concepts offering varied menu and the hippest beer brands in sophisticated décor.

One of the first places of this kind was Perłowa Pijalnia Piwa in Lublin. Its futuristic decor, huge yellow and orange bar, a wall covered with bottles and a wide selection of beers leave a powerful impression. Luckily, there are sampling sets available that make it easier for guests to make their selection. The kitchen reflects the ambience by combining simplicity and creative twists, attractive food presentation and well- thought-out flavours.

On top of being widely appreciated by Wrocław dwellers, Browar Stu Mostów run by Michał Czekajło is well-known among culinary geeks for their Food Think Tank Project that Michał cooperates with. Every day the pub offers well-recommended beers from 10 taps while the chef serves creative dishes made of the best local products that enrich beer flavours. Enjoying the beer and food, one can observe the brewing process taking place in the brewing section below the pub.

Another brewery is Brofaktura from Siedlce: a spacious hall with a wide bar stretched along its longer side, open kitchen on the one side and technical set-up (brewing and ageing tanks) on the other. The place serves 4 recently brewed beers, also available in sampling sets (4 x 125). The smaller room hosts a restaurant serving simple dishes that go well with beers.

Olsztyn has its own brewery as well. Located in the scenic landscape of the park at the foothills of the castle, a well-preserved establishment hosts a brewery, butcher’s, smokehouse, restaurant and pub. Brewing equipment and copper brewing tanks can be seen both from the outside and inside the pub as well as from the staircase and restaurant. The brewery serves unfiltered, unpasteurised beer brewed using natural methods and traditional, mostly home-made dishes: cold meats, wursts, black pudding, head cheese and sold also as take-away. They make excellent food pairing!