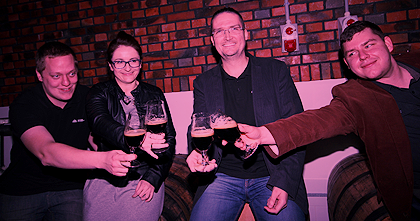 Barrel aged RIS is back on the taps! The first version sold like hot cakes and received excellent reviews. The empty Bourbon barrels were refilled with another RIS. There couldn’t be a better moment for their debut than the Beer and Brewer Day. We’re starting on the eve of the celebration weekend on Thursday, August 4.

During the final stage of the ageing process, raspberries are added to the version that received the best reviews during the Stout Month. Raspberries enrich the RIS with their aroma and acidity. Mind-blowing. Taste it! Bourbon Aged RIS with Raspberries!