We invite you to the première of
ART#9 with Bristol Brewing
Colorado Springs, USA 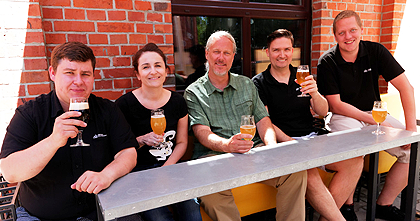 Veterans of American craft in WRCLW

We brew with Bristol Brewing Company from Colorado Springs – a brewer with 22 years of experience. It is a true veteran of American craft brewing. One of the first of the “second wave”. This is a result of the success and fame we enjoy thanks to the historic project with Pizza Boy. A clear proof that we are able to draw specialists and beer experts from the farthest corners of the world. Colorado is the cradle, Number 1-3 in any possible statistics. Suffice it to say that 10% of American breweries come from Colorado. Yes, they have 230 of them. Colorado is called „The State of Craft Beer!”.

ART#9 Oatmeal HopTart – our joint beer – it will be another of our proposals for summer. More beery than “strawberry” and therefore closer to beergeekom. A beer that is similarly soured, hops are more underlined, very interesting, including the Australian Topaz. The bitterness and aroma are stronger.
Wort souring in the brew house is a hot topic in Colorado. We contributed our yeast experience and Americans – their idea for “beer lemonade”. And without a gram of citrus!

An arrangement of very aromatic hops from the United States and Australia – Citra, and Galaxy, added only using the“late hopping” method. Combined with the velvetiness of oatmeal. A light beer, soured with lactic acid bacteria. The power of refreshment, both for Sour- and Hop-Heads. Take your first gulp!