Schops promoted
on the Wrocław Market Square
Europe on the Fork! 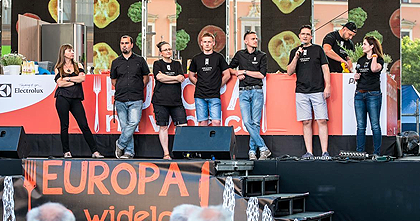 It was a big screen debut!

Shops has been promoted during the biggest culinary festival in Poland, Europe on the Fork. It was an incredible feeling to tell Wrocław dwellers about the Schöps project and even more to do so on the Market Square of the Culinary Capital of Poland; the city that bears the name of the Good Beer Festival.

Our goal was to spread the news about the project to recreate a beer style that is an integral part of the history and identity of Wrocław. Interestingly enough, the number of rising craft breweries in Poland is the highest in Wrocław while craft beer was nominated the 2015 Best Product of Lower Silesia. We have aimed at showing that craft beer has been become part of culinary debates as brewers cooperate with local food producers. We have also presented the University of Environmental Sciences as the best place to study the brewing process in Poland. Craft brewers have also shown their united forces.

The challenge was to interest the public with the history and the idea to recreate a beer style that goes back 400 years. Arletta welcomed everyone while the challenge was taken on by Agnieszka Wołczaska-Prasolik. We wanted the people to become intrigued with the taste of beer whose origins go 400 years back and which was described by chroniclers, historians and poets. As a speaker at many sector events, she has done a really good job. Grzegorz Ziemian presented the timeline of the project from the early start, through establishing cooperation with excellent brewmasters, designing the recipe, trail brews, corrections, presenting Schöps at the 2016 Trends in Brewing conference to our promotional actions (Berlin, Europe on the Fork).

Our brewery’s chef and a participant of the TopChef, Michał Czekajło, took us on a culinary trip in his “Taste Machine.” Michał baked sour-sweet doughnuts: yeast dough with a milk- based filling sprinkled with hoppy green powdered sugar! If only we weren’t pressed for time! Next, the project’s Ambassadors selected in a public voting took over: Gosia Bartkowiak (Śródmieście), Kuba Zimny (Fabryczna) and Maciej Gąd (Stare Miasto) expressed their opinions about the Schöps project and its perception among various circles and generations.

Another guest, Witold Pietrzak, PhD from the University of Environmental Sciences, commented on the “strategic cooperation” established between the university and the brewery to ensure students with opportunities. It strengthens the already leading position of the University on the brewing industry map of Poland. We’ve announced the plans to brew Schöps in July and its big debut before the international guests of the European Brewery Convention and Brewing Science on 20 September.

Join us for the premiere of Schöps! Our goal is to recreate one of the most appreciated Polish beer styles, the legendary Schöps; the symbol of WRCLW. Next, the big celebration will follow. We’re going to taste the history of our city! Together with the Project’s Ambassadors, Gosia, Piotr, Maciej, Kuba and Łukasz, we’re going to keep you posted. Such bridges are built nowhere else but in WRCLW! More info at www.facebook.com/events/259654687702022/

Visit our information stand at the Good Beer Festival between 10 and 12 June. Taste ART#8 Strawberry Berliner Weisse, which promotes our craft in Berlin and Schöps in Germany. Here’s the link to the invitation: www.facebook.com/events/274941336177750/