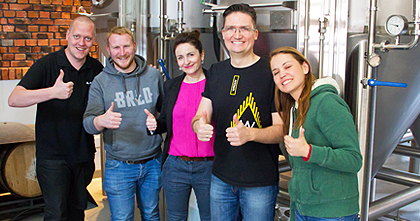 We’ve joined forces with the BRLO brewery from Berlin to create ART+8, or Berliner Weisse! We’ve taken the best of our experiences to brew a mix of German traditional style, i.e. light and refreshing beer fermented with lactic acid bacteria and new-wave German hops, Comet and Huell Melon, and a seasonal Polish touch. Details coming soon!

Berliner Weisse is cloudy, sour, wheat beer with low alcohol contents. The origins of this traditional beer style typical of the Northern German regions, Berlin specifically, goes back to the 16th century. Till the end of the 19th century it was the most popular drink in Berlin produced by over 50 various breweries! Today this number has declined to only 2 but craft brewing has made this style popular again.

The history and brewing process of the Breslauer Schöps style, which we have committed to recreate after so many years, bears some similarity to Berliner Weisse. Beginning with 1550 Schöps was considered as a leading style in our part of Europe. It was also the symbol of Wrocław. Similarly to Berliner Weisse, it brought fame to the city of its origins, which in turn spread over to numerous cities in Poland and Germany.

The beer’s debut coincides with the promotion of Schöps at the 7th edition of the Wrocław Good Beer Festival as well as the Berlin festival. And it’s just the beginning…The Berlin Bridge seems really exciting. Schöps may also make its debut at the festival in Berlin. Stay tuned at www.facebook.com/events/259654687702022/