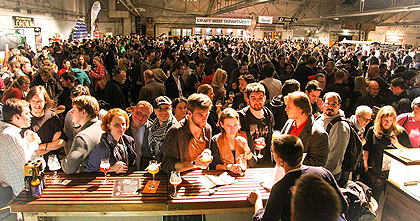 Join us at the Craft Bier Fest Wien!

The prestigious Craft Beer Fest Wien takes place twice a year. The first edition was held in November 2014. Since the very beginning women have made a huge part of the visitors. The offer is also targeted at whole families (there are kid zones). The festival gives an opportunity to discuss the differences between craft brewing and commercial production. The creativity of brewers is widely debated as well. It is said that craft has won over Vienna. Each edition stimulates the creativity of the catering industry. It seems that the number of participating restaurateurs is higher than in Poland.

The Craft Beer Fest Wien is going to open up the gates of the Austrian market before our brewery. It is the opportunity to get together, establish and strengthen business relations. We’ve brought our three brands: WRCLW Hefeweizen, Pils, Roggenbier, Rye RIS and its version: Rye RIS Bourbon Barrel Aged; SALAMANDER AIPA, Pale Ale and Strong Witbier; and two beers from the ART White IPA series and ART Doppel Weizenbock German IPA brewed in cooperation with Camba Bavaria.

We’ve had very productive meetings. We’re definitely staying in Vienna. Our beers are going to be available here in 1 or 2 places. And good news: we’re entering Slovakia! After Czech Republic, Germany and the Netherlands, we’re building bridges with Austria and Slovakia. As a result, beers brewed in WRCLW are going to be on offer in 5 countries.

We’ve been the only Polish brewery at the festival (28-30.04). It’s also the first international festival in our career. We’re promoting our beers and the city of WRCLW as the Capital of Good Beer in Poland proud of its 800 years of brewing history.

The Festival is of a multinational character cooperating directly with its counterparts in Berlin (Brewfest Berlin) and Budapest (Fözdefeszt). We’re teasing that the three festivals could threaten the supremacy of the Wrocław Good Beer Festival whose 7 th edition is going to be held soon on 10-12 June.