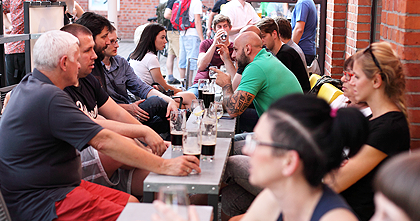 The 500 th anniversary of the German Beer Purity Law, known as the Reinheitsgebot, falls on Saturday, April 23 rd . These brewing regulations were introduced to ensure high quality beer and prevent price rigging. In the present times of the brewing revolution, the traditional laws to brew beer with the use of barley, water, yeast and hops limits the creativity of our friends in Bavaria. In effect, Polish brewers often create much more experimental beers than Germans do.

The German Beer Purity Law is a symbol worth recalling in the times when globalization and commercialization of the brewing industry have distorted the idea of real beer. It is a perfect date to open the season. This year we’re going to celebrate with our partners and Wrocław dwellers. It’s a perfect date!

Three of our brands are on taps: WRCLW Hefeweizen, Pils, Roggenbier, Rye RIS and its version aged in Bourbon barrels. SALAMANDER Pale Ale and American Wheat. The ART brands invites for the long waited for ART#1 Doppel Weizenbock German IPA.

We’re getting ready for the first weekend of May and the debut of the second beer brewed in collaboration with Camba. IPL is what IPA means for lagers. We’re going to present this style in a red version with a caramel touch. The used hops, Saphir and Mandarina Bavaria, are similar to the ones used in ART#1 Doppel Weizenbock German IPA. The chance to compare these two beer styles will definitely take you by surprise. Join us to savour the first sip!