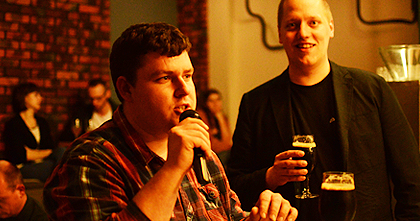 Join us for yet another weekend of the Stout Month! This time we’re offering Rye RIS with freshly oak-smoked prunes, which account for Rye RIS’s fruitiness balanced with oak smoke that brings to mind bonfire and smoked meat.

The first Barrel Aged in the history of the Brewery has been well acclaimed by critics.

“Super! The intense vanilla and chocolate praline tones as well as Bourbon barrels have done wonders. One of the Best RIS beers in Poland. Enthusiastic reviews,” writes Tomasz Kopyra on this blog.kopyra.com.

We’re presenting a new flavour every weekend. The sweetness of RIS has been balanced in several ways. Today we’re presenting the “prune” on the cake: WRCLW RIS with freshly smoked prunes.

Next week WRCLW Rye RIS with chilli and coffee beans is making its debut. Prepare for the best! It’s said that the mix of chilli and bitter chocolate releases loads of endorphins and positively affects our wellbeing. Add the Imperial Stout and it’s a real mood booster. Sweetness is balanced with spicy chillies, while the “base” chocolate tones are enhanced by roasted coffee beans.