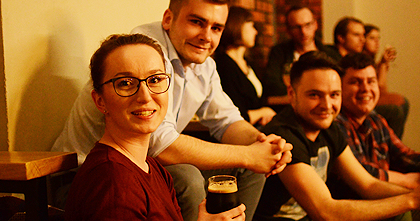 Here are the first attractions of the Stout Month

The first barrel of Rye RIS aged with coffee and cascara has been opened! We’ve used the “cold brew” method and added coffee to Rye RIS. Coffee tones seem to be made for RIS whereas peels of coffee cherries (known as cascara) account for a fruity touch of raisins, prunes and apples. Taste it!

It’s a good idea to balance the sweetness of Russian Imperial Stout with something slightly sour. Next week we’re opening Rye RIS aged with a fruit that enhances the beer’s drinkability and accounts for its wonderful aroma 🙂 . On top of it, it goes well with chocolate and coffee flavours. On taps next Thursday, April 14!

And a week later something totally different: oak smoked dried fruit that provides for Rye RIS’s fruity taste evoking the picture of a bon fire and smoked meat.

There’s more to come. April has been named the Stout Month! 🙂 We have prepared new attractions for every weekend of the month. Let us surprise you on 21 and 28 April. There is also something special being planned for the first weekend of May.

At the same time, WRCLW Rye RIS, the winner of the title of the second best RIS in Poland, is back on taps and in restaurants. Here is a list of places where you can find it: https://100mostow.pl/piwnamapa/

The unflavoured version of the Rye RIS aged in Bourbon barrels is available in shops. Since there is a huge demand for bottled beer, barrel aged Rye RIS is available on Długosza Street only. It’s the first Barrel Aged in the history of the Brewery.