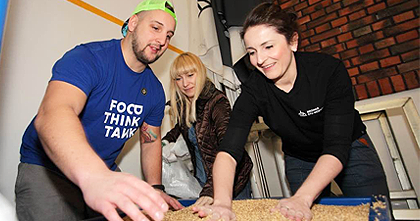 Join us for the premiere! Thursday at the Brewery!

We’ve joined forces to raise culinary awareness by promoting locally grown and natural products. We aim to show that beer is an exceptional product and cooperation in beer brewing contributes a lot to our daily lives.

Join us on Thursday 17.03, at 6:00 p.m. at Browar Stu Mostów. We’re going to the beer and share the recipe. Beginning with Friday the beer is going to be available in Wrocław. The nationwide debut takes place on Saturday: the beer will be on offer in the best pubs, multitaps and restaurants in Poland. Stay tuned for more details: www.facebook.com/events/577542609078820/

We’ve cooperated to brew the beer from spelt, wheat, Pilsner, caramel and German malts as well as top-fermentation yeast. The beer is light and refreshing with an intriguing taste produced by one exceptional ingredient balancing the slight acidity of wheat beer. And that is the grist made of carrots (baby carrots) covered with apple juice (the mutsu, idared and gala variety) which has produced strong fruity molasses. Both carrots and apples have been grown locally.

Before the actual brewing process took place, our brewers did some experimental brewing which resulted in choosing the ingredients and dishes to be served with the beer. There was also a lot of discussion about the roots of flavours and what food to serve with beer.

We’ve designed a one-of-its-kind label with the help of a stamp made of the carrot used for beer brewing. The label is available in four versions. It’s a real treat not only for beer fans – says Grzegorz Twaróg, Creative Director, Studio Graficzne Plantacja.

Food Think Tank is a group of experts from many sectors cooperating within projects focusing on cuisine. Their unconventional attitude changes the perception of flavours. The group goes back to the roots and forgotten methods of cooking. FTT uses unprocessed foods only. The cooperation to create craft beer has enriched the group’s culinary trend: the ROOTS. Both carrots and apples are traditional tastes deeply rooted in the Slavonic cultures. Everybody loves the final outcome – says Tomasz Hartman, Food Think Tank coordinator. They have actually highlighted the flavour of spelt beer – adds Mateusz Gulej, Brewmaster at Browar Stu Mostów.

The ROOTS is a culinary movement of the Food Think Tank rediscovering traditional culinary techniques such as smoking, drying, preserving, salting, cooking underground while using raw, unprocessed products. Tracing the roots and exploring rich culinary culture, the ROOTS have adopted a new perspective on food to dynamically reshape the culinary experiences of our times.

Our ART  brand stands for creative cooperation between talented and open-minded people. The brand has built another bridge among different work styles and environments. It’s all  about taste, beer, food and dialogue. This is a project typical for the reviving craft brewing industry.