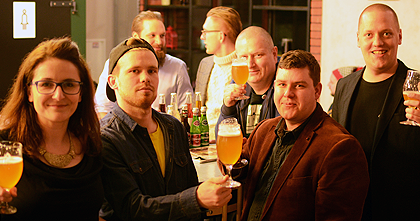 This is what the first Polish-American cooperation tastes like!

ART Imperial Apricot IPA, the beer brewed in cooperation with Pizza Boy Brewing, Pennsylvania, has made its debut. This is the first project of this type to be completed in Poland.

What we brewed in Wrocław is demanding but exceptional beer – says Mateusz. The beer style: strong, top-fermented, high in extract, light in colour with loads of American hops. And on top of that, the beer was infused with apricot puree and the legendary Falconer’s Flight hops in massive amounts. This is the beer worth the first cooperation between Polish and American brewers in history.

Falconer’s Flight® is a careful selection of the best hop varieties grown in the north- west states, in particular: Simcoe, Citra, Amarillo, Sorachi Ace with the touch of experimental hops that change from year to year. Falconer’s Flight is never the same. The proportion of specific varieties is tested and selected to provide highly intense tones of tropical and citric fruit as well as herbal and grassy aromas. Falconer’s Flight is made for IPA.

The beer has already been very well received. It’s certainly worth the first ever cooperation between Polish and American brewers! Watch the video below to find out what our guests say about the beer. Albert explains why it was a challenge to brew this one:

Pizza Boy Brewing have been awarded the World Beer Cup 2014 in the category of experimental beer. They can boast over 250 exceptionally well reviewed beers and a vast experience that they have shared with our brewery. The fact is that Americans are the drive behind the beer revolution. Setting the latest trends, they are the ones making the best beers in the world. Theirs are the most famous IPA beers in the world with Imperial IPA being the American dream of a perfect beer.

The history happens here. The first cooperation between Polish and American brewers shows the differences between craft brewing and mass commercial production. What craft values is being open-minded and getting together to share experiences. We focus on experimental and creative processes to produce exceptional taste.

Join us to taste the beer. The debut takes place tonight in Wrocław. Here is the map with places where ART Imperial Apricot IPA is on offer: https://100mostow.pl/piwna-mapa/