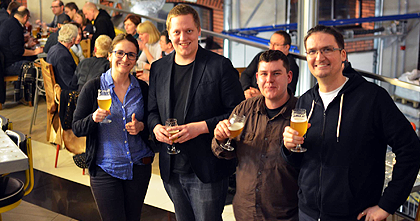 Time to take the first refreshing sip this spring!

How many of you have started their craft beer adventure with wheat beer? Exactly…That’s the reason why we’re expanding the WRCLW brand over one of the most refreshing beers: Hefeweizen. The beer’s debut has been very successful. As the tradition has it, Mateusz presented the beer on the night before the official premiere, which was held on Friday, and as early as Saturday most of our partners in Poland had the beer in their offer. WRCLW Hefeweizen is the first beer to be exported to the Netherlands. This week we’re going to Amsterdam, Asten and Breda as well as Kamperland and Middelburg. Stay tuned for more details! Here is a list of places that offer Hefeweizen. The map lists points we cooperate with. We can’t guarantee the availability but make sure to ask in person. That works best! https://100mostow.pl/piwna-mapa/

All you need to know about Hefeweizen:

Best consumed as a daily beer, Hefeweizen is brewed in accordance with the Bavarian tradition, from light malts with the majority of wheat ones. The traditional method of mashing, decoction, accounts for the beer’s rich taste in spite of the light grist. The light hopping process highlights typical features of this top-fermented beer. Yeast strains give the beer typical ester tones, bringing to mind ripe bananas, and phenolic tones evoking the smell of cloves. On top of its attractive cloudiness, the yeast also produces slight acidity, which is why WRCLW Hefeweizen is a highly refreshing beer.