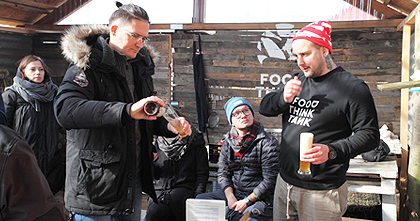 Brewing beer under the ART brand

The ART brand stands for creative cooperation between talented and open-minded people. The brand has built bridges between different work styles and environments. It’s all about taste, beer, food and dialogues. This is a project typical for the reviving craft brewing industry.

What unites us is our passion for Lower Silesia. Our beers have won the title of the Lower Silesia Product of the Year. We focus on what’s local, ecologically sound, and original. We look for what makes people happy and changes the world around us.
We’ve met to introduce our brewmaster, Mateusz, and his ideas to the Food Think Tank, before we start brewing the beer together. It’s the first time the conditions have been so severe. Mateusz brewed, shared stories and worked his magic. We’ve talked about the best food to be served with beer. We’re sure that the outcome of our cooperation will be appreciated by beer geeks, foodies and those ready for exceptional culinary experiences. Our next meeting is taking place on the 25th. We’ll brew for real this time. Meet us at the Brewery! Feel invited!

We’ve got a lot in common. The main objective of the Food Think Tank is to educate: gaining and sharing knowledge. As the foundation associates experts from various industries, there is a multitude of viewpoints on the issue of food. The think tank is based on the rule of equality. Everybody is an expert in their field and develops their own potential by learning new skills from others. They are original. They are not a molecular cuisine, Nordic Food Lab, or Cook it Raw, and for this reason foreign press still has some trouble labelling them. They are called Food Think Tank. They have their own culinary trend is called ROOTS.

The roots is a culinary movement based on the research and experimental work of the Food Think Tank foundation. Combining traditional culinary techniques such as smoking, drying, preserving, salting, cooking underground and contemporary knowledge and technological progress, the Roots cuisine is based on natural and unprocessed products from local producers or highest quality sources. The Food Think Tank respects scientific knowledge as well as the 21 centuries of culinary culture. Tracing the roots and exploring rich culinary culture, they have adopted a new perspective on food. Protecting natural products and traditional recipes, Food Think Tank is known for their open-minded and experimental nature. The date of the March debut will be announced during the brewing session. Feel invited. The Brewery opens at midday.