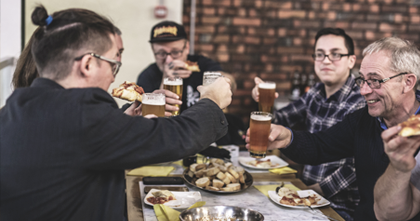 Brewmasters from the United States have visited Poland for the first time. The brewers from Pizza Boy Brewing, 2014 World Beer Cup silver medallists in the category of experimental beer, have arrived to collaborate on a beer project. Their unrivalled experience includes 200 brewed beers. We are pleased to host: Terry Hawbaker, Head Brewer, and Albert Kominski, Head of Pizza Boy Brewing.

What came as a surprise was the fact that they’ve mentioned education as the key to their success. What they mean is the finest ingredients, production time and creative process. Terry believes that education is the most important ingredient of craft industry. That’s the reason why they have made an effort to come all the way from the US to share their expertise.

Pizza Boy(s) are passionate about brewing. Always ready to improve and experiment, they are never fully satisfied with the final outcome. Although Albert has no professional background, his biggest asset is open-mindedness. Since formal education does not hinder his creativity, Albert never follows the beaten path. That’s his secret. On the other hand, Terry is the professional brewer. In his search for perfection, he’s constantly sensing, tasting, and looking at beer. One may risk to say that beer is his life. As somebody has noticed: just look at his fingers with a big beer-themed tattoo.

The Americans believe that education was the most important part of their craft revolution. Speaking about quality ingredients, slow brewing and commitment has made a difference. Nothing else but education has allowed them to keep the pace of the beer revolution for the last 40 years. And only now (!) have they actually started to reap the rewards of their long- time education. In effect, our joined project has opened up an opportunity for the Brewery and the entire craft scene.

Cooperation matters to both parties. “Sharing our experiences is invaluable. We’re going to observe the way you work, think it over and perhaps draw some inspiration. You can also learn from us, mostly, what not to do. You may think ‘these crazy Americans did that so we’ll stay away from it.’ When you share knowledge, the community of brewers grows and grows. It’s like one big family. And that’s important to us.” – said Albert.

They really enjoyed WRCLW and made themselves at home at the Brewery. They also appreciated all our beers. “All beers are flawless and exceptional. No doubt about it. They are exceptionally good. The food is excellent, too. I also like the open space; you can see everything and be part of the process. Today, the client expects to see the backstage. The more the client knows about how we produce beer, with no chemical substances or additives, and the closer the client gets to the product and the source, the better their experience”.

We’ve recorded their reactions and recommendations and divided the footage in two parts. The first part is going to be released tomorrow and the other one just before the debut.

The big debut is planned for March. Stay tuned!