American brewers to brew in WRCLW 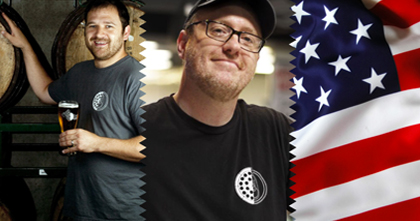 The facts speak for themselves. The changes on the global beer map have been brought about by Americans.

The American craft is going wild. While the entire beer market in the USA is undergoing a recession (0.5% growth in 2014), craft has recorded an increase of 17.6% and export of 36%. It’s a great boom at the cost of commercial breweries.

3 days ago the Brewers Association informed that the total number of the USA breweries at the end of 2015 amounted to 4.144. That means 36% on a year-to-year basis. 2.5 times within the last 5 years. There are nearly 500 new breweries to be opened soon.

There are states where there is 1 brewery per 25 thousand inhabitants. In 15 states, including Pennsylvania, there are more than 100 breweries. There are 1.5 homebrewers in the USA.

American hops have won over the beer brewing world.

Among the most frequently used hops in Poland, 7 come from the USA. 58% of all hops used in Poland are American hops. The best source of information is a comprehensive review of the 2015 year in the beer industry published at the Piwna Zwrotnica blog. As Tomasz Kopyta (TED) reports there are over 800 new hop varieties being designed.

One of the most interesting and courageous American brewers are Terry Hawbaker, Head Brewer, and Albert Kominski, the head of Als of Hampden / Pizza Boy Brewing Co., the winner of the silver medal at the World Beer Cup 2014 in the experimental beer category.

Together they have brewed over 200 beers, which accounts for the total number of beers brewed by several breweries. Known for being experimental, the brewers lend a hand to those who start their adventure with craft beer. They are happy to share their experiences fighting against flavourless beer. They have cooperated with numerous American brewers: Troegs and Appalachian Brewing, Voodoo Brewing Company, Tired Hands Brewing Company, Liquid Hero Brewery, Yards Brewing Co., DuClaw Brewing Company and Canada-based A l’abri de la Tempête. Even though they usually support their region, they are willing to visit us and dedicate the collaboration to their local community. We can’t wait!

The whole project started some time ago when loads of interesting American hops were shipped to WRCLW as ordered by Terry and Albert.

The history has moved forward and we are writing it! You can join us and be part of this project! Feel invited!

You keep asking us: what beer style are you planning to brew? And why not wheat beer? Join us to know the answer!

The project has opened up an opportunity to have a debate about the beer market and compare the beer market in Poland and the USA. We’re going to host brewers and enthusiasts from Wrocław, Poland, Germany and even Sweden! Such meetings broaden our horizons. Join the meeting and debate.