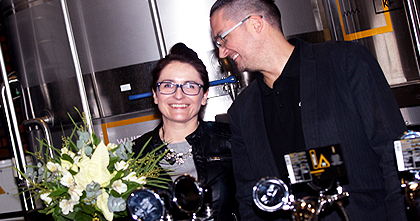 Christmas wishes and a gift to WRCLW

Merry Christmas and a prosperous New Year! Let’s build more bridges, set more goals and find new inspiration to achieve them. These are Christmas wishes from the team of Browar Stu Mostów.

And here is the promised gift:

We have engaged in the project of reviving the historical beer style Schöps. Our goal is to recreate and brewed this one of the well-known and appreciated beers: the Wrocław Schöps.
The first trail brew has been completed with an international team. We’re going to present the beer in September 2016 to the guests of the EBC Symposium and Brewing Science Group, a great meeting of scientists and technologists of the brewing industry that is taking place in Wrocław in September 2016. This is how we want to promote one of the most Wrocław-like styles and WRCLW itself.

The Symposium is the biggest meeting of the representatives of the brewing industry. It brings together brewers, technologists, scientists and producers of brewing equipment. We’re expecting over one thousand participants from Europe only. Mark your calendars: 18-22 September 2016.

The project started in July 2015 in Wrocław by: Grzegorz Ziemian, Arletta Ziemian and Mateusz Gulej, brewmaster at Browar Stu Mostów, and John M. Brauer, the head of The Brewers of Europe in Brussels.

To find out more about this beer style, read articles by Grzegorz Sobel published at: smakiwrocławia.pl http://smakiwroclawia.pl/2015/10/31/schops-%E2%80%93-najslawniejsze-piwo-wroclawiu-czesc-1/ http://smakiwroclawia.pl/2015/11/16/schops-%E2%80%93-najslawniejsze-piwo-wroclawskie-czesc-2/
Kasia Rozanska “Language is the skin on my thought” A.Roy