Successful Year in the City of Good Beer 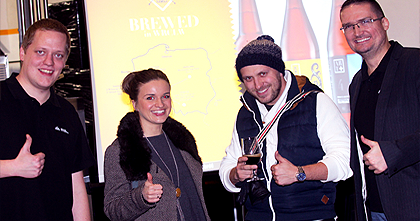 Media coverage of our 1st Birthday

“Browar Stu Mostów celebrates a successful year and presents its birthday beer” or “Wrocław plays an important role on the Polish beer scene” – such and similar comments on our first anniversary have appeared in Wrocław media.

We can only confirm that the year has been a successful one. Developing dynamically, Wrocław ranks first in Poland in terms of the number of beer initiatives. The city offers: the best festival, parties, events, whole generations interested in craft beer, experts and scientists. It’s been the first time that craft beer has been selected the 2015 Lower Silesia Product. The numbers speak for themselves: 23 thousand visitors to the brewery discovered the philosophy behind craft beer; 145 places where our beers are available; 3 flourishing brands; 15 successful and well-received debuts with the birthday RIS being the 15th beer sold even before its premiere took place.

We’re proud to restate our mission: Browar Stu Mostów was created to revive the brewing tradition in Poland. Our drive is the yearning for good quality beer, job satisfaction, slower and simpler pace of life as well as flavour awareness. That’s our goal. Here is the footage of last year’s official opening: https://youtu.be/BB-pqM-CSs8

Here are more excerpts from the first press releases: “Browar Stu Mostów started by Arletta and Grzegorz Ziemian joined the craft beer family exactly a year ago. It was the first in many years craft brewery opened in Wrocław. December 11th marks the debut of the first beers brewed on the spot. Since that day, the brewery’s brands: WRCLW, Salamander and ART have won recognition in and beyond Wrocław. The brewery, which regularly hosts brewmasters, craftsmen, chefs and producers of regional products, supports numerous local initiatives, organizes samplings and educational tours in the brewery. In September 2016 the brewery is going to host Symposium EBC 2016, which is the largest meeting of experts and technologists of the brewing sector.”

“Browar Stu Mostów is the first in years craft brewery opened in Wrocław. Soon after its opening, it gained its name of the craft Ferrari. The success of the first year is impressive: 3 brands, 14 debuts and 14 successes.” [WRCLW Rye RIS is the fifteenth beer brewed on Długosza Street].

WRCLW beers were awarded the title of the 2015 Lower Silesia Product. WRCLW Dunkelweizen was the official beer of the Wrocław Good Beer Festival. SALAMANDER Hoppy Violet Potato Lager is the first Polish beer to win a medal at 2015The Brussels Beer Challenge.

White IPA, the beer brewed in collaboration with the Wrocław artists of the Neo-Nówka cabaret and released under the ART brand, is now the star of the biggest in Poland campaign promoting craft among and beyond its loyal fans. The brewery exports its beer to Czech Republic and Germany. It’s worth remembering that the owners were awarded the title of the 2014 People of the Year Award, a contest organized by our portal [tuWroclaw].

– Our priority is quality. We’ve put together a dream team. We’ve built bridges between people, cities and countries. We draw both from the history and the present moment. We’ve attracted brewmasters, craftsmen, chefs and producers of local products. We are all about cooperation. We hope that’s just the beginning – sum up Arletta and Grzegorz Ziemian, the founders of Browar Stu Mostów.

– Browar Stu Mostów has shaken up the beer scene in Wrocław. They certainly stand for what’s the best in Wrocław. We appreciate the brewery for being professional in doing business and successful marketing. What they create on Długosza street has been observed and benchmarked by the entire sector. Still, the most important part comes in the bottle. Chapeaux bas. It’s pleasure to sell this beer – says one of the business partners of Browar Stu Mostów.”

WRCLW Rye RIS made a successful debut. It has set several records. It’s the first beer produced at the Brewery to be sold even before its official premier took place. That only goes to show that our fans from Wrocław appreciate our hard work and can’t wait to taste our new beers. We couldn’t be happier!

The beer made in Wrocław is exported to Germany and the Czech Republic. It has also won over clients from numerous cult pubs in Poland. The beer is delivered to 82 spots in Wrocław only, 96 in Lower Silesia, and 145 in Poland. We’re going beyond the craft limits.

And that’s just the beginning! Keep your fingers crossed. We are full of ideas and energy!