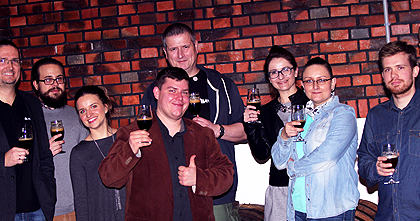 A classic style in a refreshed version for those in search of new sensations. It’s perfect both to celebrate our birthday and savour on a wintery night. The beer’s clear malty tones: coffee, chocolate and caramel as well as rye malts, bring to mind Belgium pralines. It’s highly palatable beer. Visit us to take the first sip!

The first birthday of Browar Stu Mostów will be marked with one of the most powerful beer styles around the world: Russian Imperial Stout. The origins of this historic beer date back to the turn of the 18th century when London-based breweries started brewing this style. Two centuries of fame brought to us by Schöps later, brewmasters from the other part of the continent opened a new chapter in the history of this full-flavoured and full-bodied beer.

This style was created for exactly the same reasons as today’s new wave styles: to meet the needs of consumers looking for new quality beers, specifically full-flavoured and full-bodied ones. With time, the style gained so much recognition all over Europe that it started to be exported to Sankt Petersburg. It is said to be the most favourite beer of Catherine the Great. It wasn’t, however, until the 20th century that the beer gained its name of the Russian Imperial Stout. One thing is certain: the “Imperial” part of its name stands for the highest quality and the strongest beer in our offer.

In order to achieve such a high initial extract, one needs to use a huge amount of malts. We used over half a tonne per batch! The malts we added: caramel, Munich, chocolate and roasted account for the full-bodied taste with tones of bitter chocoalte, liquorice, cocoa and dark coffee. The rather unusual ingredient of Russian Imperial Stout, that’s rye malt, which increases the stickiness of the brewed beer, prolongs the intensity of flavours. When stirred in a glass, the malt goes slowly to the bottom creating the “beer crying” effect.

Traditional German hops give the beer clear bitterness necessary to balance the sweetness and maltiness of Rye RIS. Still, we couldn’t resist adding hops to the aroma itself as hop compounds positively affect the maturing process of strong dark beers.

With such a high extract, the fermenting process becomes a challenge. The yeasts used must be the highest quality as the gradually increasing alcohol content is deadly for them. While fermenting such strong beer, yeasts reach its physiological limits. That’s the reason why the beer has been fermented twice. Each time we added the freshest batch of high fermentation yeasts.

On top of the complex fermenting process, such beer needs a long lagering period in order for the rich palette of the flavours to achieve balance. Our goal has also been to create slightly oxidised tones such as prunes, dry cherries or raisins that are released with time. Our beer has lagered 3 months in a tank, which is 5-6 times longer than what some lighter beers usually need.

Interestingly enough, such strong, dark beers may also age in a bottle. Keep your bottle of Russian Imperial Stout in a cooler place (with a steady temperature of about 10⁰C) and open it a year, two, or event twenty years later! It won’t go off. Instead, it will taste even better.

How to serve it?

This beer is best served in glasses that capture aromas such as sniffter or sensory types. It tastes best when warmed up slightly in order to show the entire range of flavours and aromas. Another idea is to start tasting beer at 10-12⁰C and warm it up in your hands to reach 16-18⁰C. As the beer temperature rises, aromas get more intense. It is said that the beer “opens” to show a variety of flavours.

To find out more about the ingredients and characteristics of our RIS, visit: https://100mostow.pl/wrclw-rye-ris/

On the day of its debut, the beer will be available in WRCLW: https://100mostow.pl/piwna-mapa/