To celebrate the 600th birth anniversary
of Jan Długosz 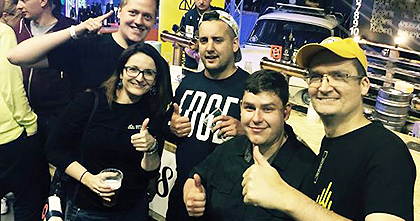 The event of the day

Here are our birthday plans: WRCLW Rye RIS, one of the most powerful styles, Russian Imperial Stout, is making its debut on 11 December. The origins of this historic beer date back to London breweries at the turn of the 18th century. This style was created for exactly the same reasons as today’s new wave styles: to meet the needs of consumers looking for new quality beers, specifically the more full-bodied and full-flavoured ones. With time, the style gained so much recognition all over Europe that it started to be exported to Sankt Petersburg. It wasn’t, however, until the 20th century that the beer gained its name of the Russian Imperial Stout, presumably for marketing reasons. One thing is certain: the “Imperial” part of its name stands for the best and the strongest beer in our offer.

RIS is the style for beer enthusiasts looking for new sensations. It is highly palatable beer whose coffee, chocoalte, caramel and velvety rye malts bring to mind Belgian pralines. Untransparently dark, the beer is brewed with a surprising amount of ingredients: abundance of malts to achieve the high extract, plenty of hops to balance the full-bodied and malty flavour. Another characteristic is the long fermentation and lagering process that allow the beer to mature and balance its rich flavours.

We’re going to present this classic style in a refreshed version. The additional rye malt enriches mouthfeel and thickness prolonging the outstanding taste and aroma. The chocolate and coffee tones with a subtle touch of caramel and high contents of alcohol bring to mind luxurious pralines. Whereas the longer lagering process accounts for the prune aroma. Despite the exquisite mix of produced sensations, WRCLW Rye RIS is harmonious and velvety. It’s perfect for long winter nights. The beer to celebrate the Brewery’s first anniversary.

Visit us to take the first sip!

The date is by no means accidental. The 600th birth anniversary of Jan Długosz falls on December 1. Długosza Street stands for our address and our history . 🙂 Długosz used to record the origins of state and the qualities of Polish beer: “Wine is hardly ever drunk here and vineyards unheard of. Yet, Poland has a drink brewed from wheat, hops and water known as piwo; there’s nothing better to invigorate one’s body. Its outstanding flavour gives pleasure to the locals and enchants foreigners more than anywhere else.”

The brewing history in WRCLW equals the history of maintaining the high standards. That’s the reason why one hundred years later the Germans adopted the Bavarian Beer Purity Law which listed ingredients to be used in brewing beer. The round anniversary of Długosz’s birth has opened up the opportunity to celebrate the revival of craft brewing in our city. GoWRCLW!