WRCLW at the Craft Beer Expo in Lublin 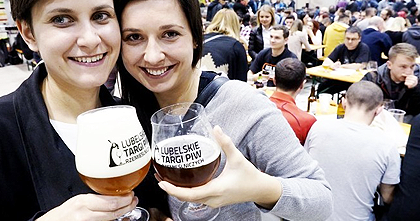 Lublin has lived up to our expectations. What a fantastic weekend at the Craft Beer Expo (28- 29.11). Since it was the first craft event in Lublin, the organizers and invited breweries were full of enthusiasm and energy. Well done! Thank you! Would you agree that we have successfully built a bridge between WRCLW and LUBLIN? 🙂

It was a real cracker. When we set it off, we realized how much people craved for real craft beer. The number of enthusiasts of beer produced by open-minded, creative and innovative brewers is growing at a rapid pace. The event has recharged the batteries of our team and many representatives of the craft brewery.

We presented the debut-making SALAMANDER Black IPA brewed for this year’s 3rd edition of the Wrocław Beer Trail (13-15.11); SALAMANDER Hoppy Violet Potato Lager awarded at the 2015 Brussels Beer Challenge (8.11) brewed for the Beer Geek Madness; AIPA, Pale Ale and Wheat Porter; WRCLW Pils and Roggen awarded the title of the 2015 Lower Silesia Product. A taste of WRCLW in Lublin!

We promoted all our brands. SALAMANDER is the symbol of getting together, friendship and good conversation. The Salamander brand beers follow the latest new wave styles. The WRCLW brand strengthens our identity and taste awareness. As the brand’s name contains only consonants, the products contain only traditional beer brewing ingredients. WRCLW stands for the classics in refreshed craft versions. ART is the brand under which we tend to brew beer in collaboration with our partners. Aimed at creative people, the brand builds bridges between people and beer styles. The brand also helps us to promote craft as part of the creative capital of WRCLW, Lower Silesia and Poland.

ART White IPA is the beer brewed in collaboration with the Neo-Nówka cabaret to celebrate their 15th anniversary. So far very well received in Poland, the beer’s intriguing hoppy aroma brings to mind tropical fruit, passion fruit, citrus and flowery tones. The hop varieties as well as bitter and sweet orange peels account for the beer’s intense bitterness. Citrus cilantro gives this top-fermented beer its final touch. Brewed with a sense of humour, it is to be consumed with a smile. Taste it with a company of friends!

Greetings to Lublin! Visit us in WRCLW.

More about the event at: www.targipiw.lublin.pl/aktualnosci