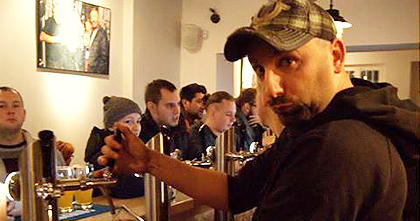 Craft beer has been introduced to Hundreds of people who would never have tasted our beers if it hadn’t been for the promotion at the Gala. Everyone was impressed by an elderly lady that ordered a “small beer” and followed the electric atmosphere of the pub. Everything about the event was outstanding: promotion, contest, hostesses, invitations, leaflets circulated in front of the Spodek arena. Congratulations!

As the first multitap brand to go beyond WRCLW, Kontynuacja is the ambassador of Wrocław’s brewing traditions and ambitions. Neo-Nówka, on the other hand, is the first cabaret from Wrocław. We have succeeded in building bridges between Craft and Cabaret taking the best of these two worlds. The outcome is ART+4 White IPA. This is untypical beer in the sense of combining two great brewing styles: American IPA and Witbier. There is the freshness and hoppy power of American IPA and the intensity of orange peels and citrus cilantro of Witbier. We celebrated the 15th anniversary of Neo-Nówka at a Saturday After Party hosting hundreds of people interested in craft brewing who shared emotions stirred by the cabaret.

Here are two videos to remind you what the cooperation on the brewing process looked like:

Radek, Michał and Roman had a unique chance to discover for themselves what craft brewing is about. We showed the difference between craft and commercial brewing from the stage of malt grinding to fermentation and lagering. Mietek tried lagering himself while Luśka was drinking off the wort from the boiler. We’ve got it all taped. 🙂 Finally, we checked the extract of our White IPA. To celebrate the 15th anniversary of the Neo-Nówka cabaret we have created beer with 15 % by weight. One percent for one year on stage.

The cabaret show has started the biggest promotion of craft going beyond the circle of long- term enthusiasts. The audience learned that craft beer is nothing like what mass media serve us. The profile of Neo-Neonówka itself has more fans than all profiles of craft breweries. It’s a grand tour. And that’s exactly what makes us happy.

As it has turned out these two seemingly non-matching worlds, that of the cabaret and craft beer, may provide inspiration to each other. The Polish cabaret is unique worldwide, so is the wave of Polish craft brewing. Exchanging experiences and combining styles, we’ve taken the scene by storm. Our cooperation has been a source of immense pleasure.

Good news to those who have missed the show celebrating the 15th anniversary of the cabaret: the tour is going to continue next year! We’re brewing another surprise to celebrate that occasion. Craft beer means well-planned beer. 🙂 Fans from WRCLW can still watch the show at the National Forum of Music. Tickets available at: www.biletynakabarety.pl

If you missed the Saturday event at Kontynuacja, the photo gallery is available below.